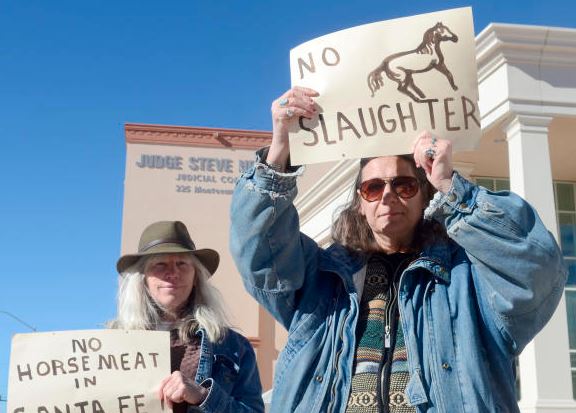 This article mentions that the horse meat is the same grade as horse meat eaten by humans. No where does the article mention bute and other drugs commonly given to horses is often found in human grade horse meat. Many people do not know that bute (Phenylbutazone) was originally an arthritis medication given to humans. It was quickly discovered that even the very smallest amount of bute could cause life threatening liver damage. It is now also listed as a carcinogen in humans. Dr. Ann Marini has done studies on animals and bute. “Studies performed in laboratory animals have shown that phenylbutazone has carcinogenic properties. Based upon these studies, phenylbutazone is just as dangerous to animals as it is to humans,”. Feeding zoo animals this tainted meat is a terrible decision. The destruction of horses as well as putting zoo animals at risk makes this a no-brainer when deciding NOT to use horses as food. ~ HfH 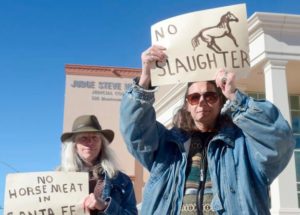 The lions, tigers and bears at the Albuquerque BioPark Zoo couldn’t have cared less about last year’s vociferous debate over whether horse slaughter should be resumed in the United States.

They were content just wolfing down their daily rations of imported horse meat – roughly 38,000 pounds of it per year.

Last year’s planned opening of a horse slaughter plant near Roswell outraged a large contingent – nationwide and in New Mexico – who argued that horse slaughter is inhumane and should not be allowed in the United States.

That controversy didn’t affect Albuquerque’s zoo, or its practice of feeding horse meat to many of its residents.

Zoo animals, it turns out, can be notoriously finicky eaters, said Ralph Zimmerman, the zoo’s head veterinarian. But the majority of the zoo’s large carnivores prefer horse meat over beef or pork, both of which would cost considerably more without offering the nutritional benefits of their equine counterpart.

Zimmerman said horse meat is “nutritionally very sound.” It’s higher in amino acids, B-6 and B-12 vitamins, and iron than beef and many other sources of protein.

“And it’s low in fat so it’s easier to balance an animal’s diet,” he said.

In fact, horse meat is so lean that zoos or their suppliers add taurine and extra vitamins to ensure it meets each animal’s dietary needs.

Zoo director Rick Janser said horse meat has been a daily staple of the zoo’s large carnivores – as well as smaller ones like Tasmanian Devils, various rodents and even birds of prey – for at least 30 years