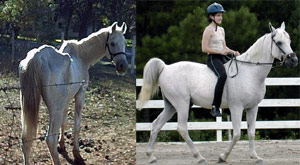 Home – a place of friends, of love, a place where one is accepted with open arms, where food is always available, where others care not for what you can do, but for what you are. That’s where Ziggy is now – home.

Five months ago Ziggy was as close to death as a horse can get, starved beyond belief, living in a muddy, filthy pen surrounded by barbed-wire, owned by humans that cared less whether he lived or died. Five very short months ago we loaded Ziggy in our trailer and he entered the gates of Habitat for Horses, there to rest, to heal and to start the road to recovery. The medical part was easy – worming, dental work, hoof work, special diets, medications, supplements. His worn and weak body gained strength every day.

Renewing his spirit wasn’t so easy. It’s never a matter of, “Throw some feed out there and he’ll be okay,” as some have suggested. Like a child who is constantly reminded that they are worthless, the starved horse either develops a withdrawn personality or turns aggressive with hatred and fear. Ziggy withdrew into his shell, partly for survival and partly because others convinced him he was worthless, that feeding him was a waste of time. For two weeks after he passed through our gates he didn’t raise his head from the hay bale, wouldn’t look at anyone, wouldn’t associate with other horses. The hay was his life, his only grasp on survival.

He noticed something different about the people that took care of him. There was no cussing, no threats, no pushing him away. The feed he received came at set times everyday. The voices were gentle, the touches were soft. Volunteers came to brush him, to comb through his mane and tail, to tend to his wounds. There were hugs, even a few tears, from those that came to visit. And like a child, Ziggy slowly started to believe again. He started to understand that not all humans are bad, that someone cared about him. Through that touch, he started to believe in himself.

From that moment on, Ziggy became a miracle horse. Turned out with the herd, he blossomed into a true horse. Each day brought more excitement, new friends, more strength and power. Through the round-pen training, saddling and riding, he flourished in spirit. Once Jennifer sat in the saddle, Ziggy never looked back. At that moment, in that single second, the starved, weak and dying Ziggy faded from his mind forever.

Ziggy passed through our gate one more time. On March 22, Ziggy jumped in the trailer for a ride home. He had never been there before, but he rode off into the open arms of his adoptive human, where he will always be loved, where he will never be starved, where he can be what he was always meant to be – a perfect horse, a great horse, a horse with a magical spirit. 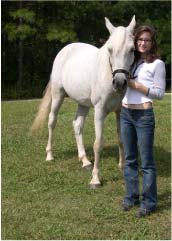 A few words from his new mom (Revised Jan. 25, 2005):
Hope Rising and Ziggy
Hope Rising is a book by Kim Meeder who founded the Crystal Peaks Youth Ranch in Bend, OR. The nonprofit organization is a place that rescues abused and neglected horses, rehabilitates them and pairs them with troubled and neglected children. The mental healing of both begins.

Each little story I read, I cried. It’s beyond my control not too. They are heart warming and saturated with hope. It’s truly an inspirational book. I highly recommend it.

There was one particular story that reminded me of what Ziggy has done for me. Oh, how I cried. Not many know of the true nature of how Ziggy has helped healed my heart and soul.

Ten years ago, my life was filled with loss and pain; loss of a husband to alcoholism, loss of a twin sister to drugs and alcohol, loss of friends who moved away and loss of my mom and dad due to a falling out. For ten years I have relied upon myself financially and emotionally. For ten years I did not cry.

I learned to survive without the care of dying, and learned to accept more losses without crying. To those new friends I met, I gave what I could but could not give what I wanted to give. My heart was guarded, and my soul needed a little light.

I moved to Atlanta “because I wanted to be in a large city”. I love large cities. I love New York. One can get lost in the crowd and never be seen. The “background noise” was enough to know that people were around yet I could still remain invisible. It was the perfect wall to run to and hide behind.

I moved to be with someone I loved. He taught me how to open up a little, the rest came later. I also learned how to be dependent upon someone for support when needed, emotionally and financially.

The major changes came when I changed my career, purchase a Mac and began to learn to design web sites. At the time, even though I was racing motorcycles, I was opening my heart up to having a horse in my life. I began searching the Internet. I found Habitat for Horses. The site was difficult to navigate but the stories portrayed love and warmth. I signed up for the newsletter.

One particular newsletter came through asking for feedback regarding the direction of HfH and the website. So, I answered all the questions, even printed out the front page of the website, marked it up with suggestions and faxed it. Jerry contacted me almost immediately. There it began. I started working on the design of the site 9 days after Ziggy’s arrival. My hope had walked through the gates in what seemed a perfect timing.

When I saw a certain picture of Ziggy, his eyes staring directly into the camera, I knew he was looking for me. I felt a kindred connection. The Universe knew and had sent him just for me. Ziggy was the answer and much much more to all of my childhood dreams of the “perfect” Arabian soul mate and companion. “Perfect” was defined by my own needs, not wants. Somehow, one never gets what one wants, but one always get what one needs. Ziggy was pure love on four legs.

During “the time of Ziggy” in Atlanta, I began getting closer to my family. Kelli had gone through drug and alcohol rehab and my dad had been attending my motorcycle races in the past. The leap with my mom was when I asked her to travel with me to pick up Ziggy. It was a trip I shall never forget. It was the beginning of a long overdue healing. I had designed the HfH site while listening to Wildfire by Michael Murphy. It was the plan to be listening to that song as we pulled into Ziggy’s new home…and we did…and I cried…and the healing and love began.

Ziggy is the love of my life. My inspiration and my savior. I have my family back now, the love and support I have been looking for in cities I don’t belong in. I am no longer running…and Ziggy and I are going home.

We are leaving for [city name withheld] February 14th (the perfect symbolic day, the day two years ago I met Ziggy and Ziggy’s birthday) to be with the ones who love us. We have their full support. We are going home to love and it is long overdue.

I know that all of you say I have done so much for HfH and the website, but truthfully, HfH has done much much for me. Probably at least once a week, I still cry as I drive out to be with Ziggy. I can never forget how far I’ve come and who is to thank. Jerry, Ziggy, and all of HfH, I am forever in your debt.

With much love from a healed heart,
Ziggy’s girl