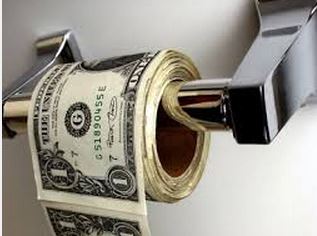 From: The Examiner
By: Timothy Whiteman October 1, 2013

“There’s no more cuts to make. The cupboard is bare…”

The federal government is allegedly broke, former Speaker of the House Nancy Pelosi tells the world that “the cupboard is bare,” but in what many fiscal conservatives call a phony and faked financial crisis, a possible prime example could be the almost $100,000 for a single-hole outhouse the feds are doling out for construction at an Alaskan nature path, as reported by the right-of-center news portal the Cybercast News Service (CNSNews.com) on Oct. 1, 2013.

With a rather large percentage of the federal government in the shutdown mode due to, as Congresswoman Nancy Pelosi (Democrat – San Francisco) recently declared:

Yet somehow, the Bureau of Land Management (BLM) recently dropped a staggering $98,670 for the purchase and installation of a single toilet outhouse at the Swede Lake trailhead in the extremely remote southeast hinterlands of Alaska.

The taxpayer expenditure was for “a single-vault Romtec 1011 ‘Aspen Single’ prefabricated waterless toilet and its installation at the parking area for the trail head” as reported by CNSNews.com

K.J. Mushovic of the BLM was quoted by CNSNews.com, “Almost half of it (contract expense) is for the cost of the toilet.”

The Roseburg, Oregon based Romtec, Inc. lists the Aspen Single pre-fab privvy on its website for “as low as $9,999”, but the unsure BLM spokesman said the price they paid “likely” includes shipping to Alaska.

Besides an undisclosed amount of taxpayer cash to spring for transporting the diminutive outbuilding the approximately 2,500 miles, Mushovic added:

[quote style=”2″]The cost of all the materials that will have to be taken to the site.

There will be earthwork that’ll have to be done.[/quote]

The BLM stated the contract to install a single toilet outhouse was awarded to Big Street Construction Inc. of North Pole, Alaska, which is located about 3 hours from the installation site.

[quote style=”2″]When we are talking about this trail head — you turn off this highway (Denali Highway) onto an unpaved area.You drive in maybe a quarter of a mile.

I would consider it to be remote.[/quote]