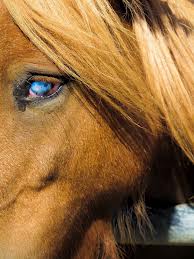 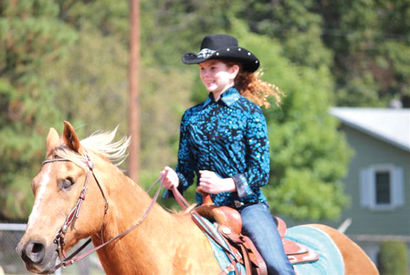 IRON MOUNTAIN – Victoria Czech had owned Skips Golden Silk, a double-registered palomino quarter horse, for two years when she found out he would eventually go blind in both eyes.

The Chippewa Falls, Wis., girl was 10 when Skip was diagnosed with glaucoma. Skip was 24.

“My first reaction was, I was really sad, because I didn’t know if I could use him again,” said Victoria, who goes by Tori. “I talked to my mom about it and she said he would be fine, and he was Skip, and he would have a special need.”

Mary Czech, mother of Tori, said learning of their gelding’s glaucoma in September 2010 was a shock and a heartbreak.

“We kept Skip because he had so much life left to give. You don’t put an animal down because he can’t see. He was in fantastic shape,” Mary Czech said.

After doing research with Nancie Carlson of Iron Mountain, Skip’s original owner, and finding out “the quality of life a blind horse can have if given the proper care,” Czech’s local veterinarian decided to perform surgery.

Carlson, a horse enthusiast, had bought 4-year-old Skip in 1990 at an auction in Cannon Falls, Minn.

He was trained by the late Heather Janssen of Vulcan. Janssen died in a traffic accident in July 2012.

“Heather and I showed him, and he won multiple grand championships,” Carlson said. “Due to events in my life, I ended up selling him to a family in Wisconsin. For several years, their daughter showed Skip successfully with many state awards. Their daughter graduated and sold Skip in 2008 to the Czech family of Chippewa Falls, Wis.”

In 2011, one of Skip’s eyes was surgically removed.

….CONTINUED at the Daily News