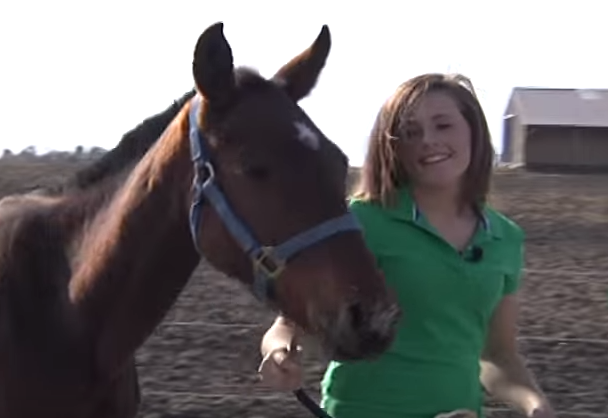 This story not only touches the heart, it expresses the true bond between horses and humans – the love. If you ever wish to make that turn – go down that other road, like Kelsey and her Mom did, contact Habitat for Horses. The connection you will make, the love you will receive – and give – with an adopted horse is like no other. Habitat for Horses takes in and starts the healing for horses that were starved and/or abused. You finish the healing by making that connection and giving them a loving home. Read and watch the story below then click here to view horses ready to make that connection. ~ HfH

From: Little Things
By: Caroline Bayard

Whether you believe that everything happens for a reason or not, it’s hard to argue that what happens in the following story is anything other than fate.

When it comes to amazing animal rescues, as you can see in this heart-pounding video of marine biologists helping an injured sea turtle, it’s very often that the right person is in the right place at the right time. For Central Illinois teenager Kelsey Allonge and her mother this statement couldn’t be truer.

Kelsey is an animal lover who was driving early in the morning with her mother on the way to a swap meet/flea market when Mom took a wrong turn and decided to take a different route. That’s when Kelsey spotted a weak, thin horse eating grass on the side of a remote road. Kelsey felt an instant connection with the horse, who was severely malnourished and had run away from her abusive owners.

Kelsey and her mother were faced with a decision to make. Do they go on their way or try to help the dying 6-month-old horse? The teenager knew she had to get the horse home and help her, so she got out of the car at 5:30 a.m. and walked the horse nine miles to her mother’s home. It’s a miracle that this poor horse, who she named Sunny, even survived the long walk home, but what happened next is truly incredible.

As it turned out, it wasn’t just Sunny who needed someone like Kelsey… She needed the horse just as badly.