Why do you use spurs on your horse?

Habitat For Horses / breaking  / Why do you use spurs on your horse?
3

Why do you use spurs on your horse? 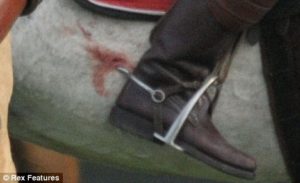 Basically, lack of forward movement was because of spine dysfunction instead of a lack of hind leg activity. The thought behind removing my spurs was that with the spurs on I would likely be looking to the problems associated with increasing hind leg activity, instead of concentrating on the thoracolumbar column dysfunction.

It was amazing how fast the horses adapted to the no-spurs situation. In fact, very soon, they responded with greater accuracy to any touch of my legs. At first, I attributed their calmness, subtleness and higher sensitivity to the fact that they no longer feared the sharp contact of the spurs. Equine research had already demonstrated the wrongness of Gustave Steinbrecht’s “spur attacks.”

Jean Marie Denoix DVM, PhD explained that having two heads, one inserted higher on one vertebral body and the other lower on the adjacent vertebrae, backward movement of the rib stimulated by the contraction of the muscles situate between the ribs, “spurs attack,” compressed and therefore altered the mobility of the two vertebrae connected to the rib.

Further studies demonstrated that the old concept of the rider’s legs stimulating muscles engaging the hind legs was unrelated to equine functional anatomy. The muscles situated under the rider’s leg are the rectus abdominis and they don’t engage the hind legs. The rider’s leg touches sensors, which are designed to feel touch. These sensors have the capacity to feel a fly.