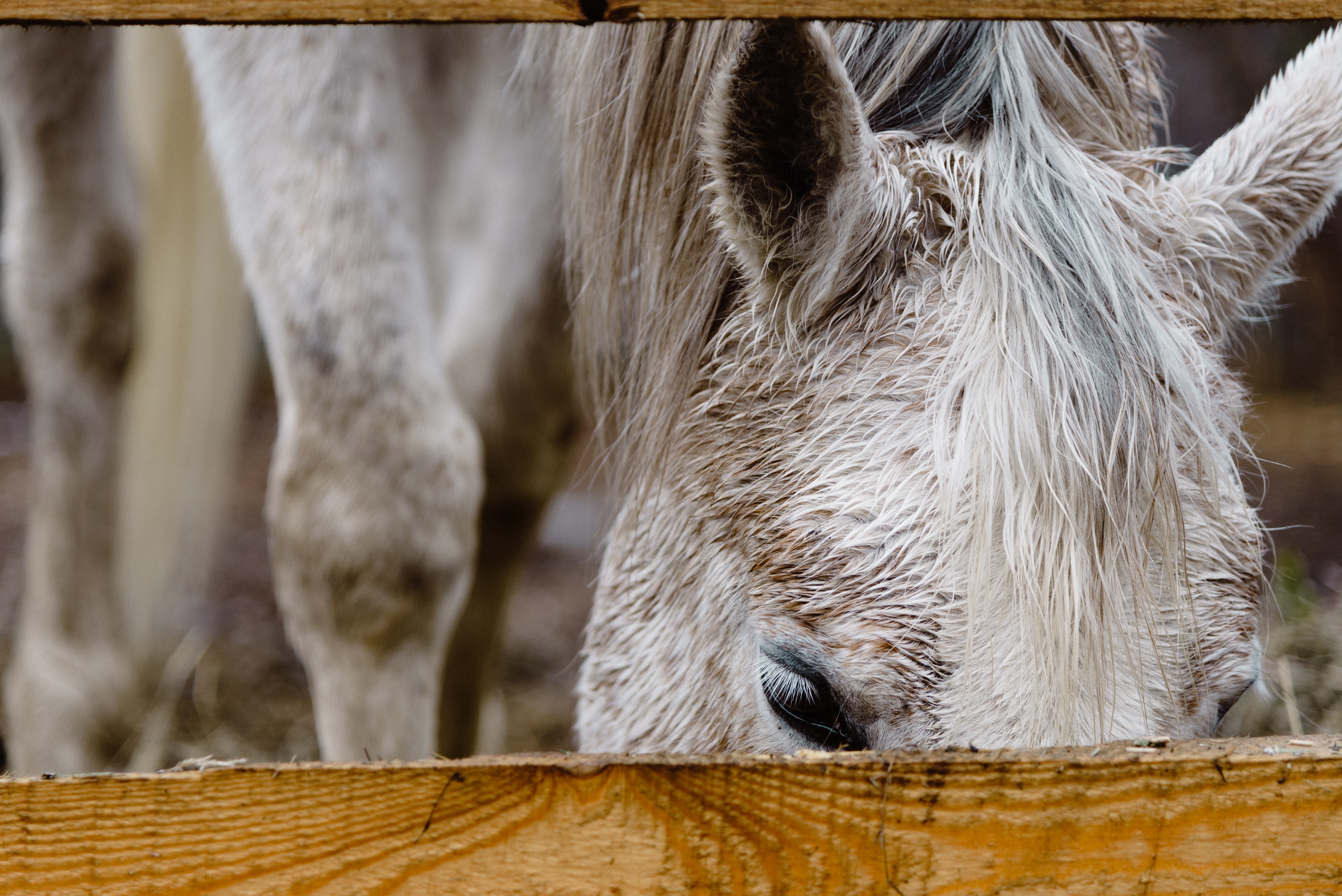 It isn’t unusual for us to bring in a horse that has been so starved, beaten, and abused that they have given up on the will to live. They are some of the hardest cases to bring back from the edge of death. There is no spark in their eyes, they stand head down, dazed, unresponsive to any stimulus. Such was the case of one recent intake: a skin-and-bones mare we named Peggy taken from a pasture where other horses had starved to death.

Our normal skinny horse intake program wasn’t working on her. We had all the usual medical work done, everything from worming to hoof trimming, and we even had the dentist take a look inside her mouth. He didn’t find much — starvation will do that — and she was too thin for sedation drugs, so we put that off for a couple of months. For our skinny horses with no teeth, we mix a wonderful soup that is usually gobbled up in minutes. Not for her. She had no interest in food, or in life.

I’m amazed how a horse body survives when there’s nothing to survive on, with literally no food intake at all for a little while, time was running out for Peggy. I knew that somehow, someway, we had to get to her or she would be dead within days.

I’ll let others explain why magical things happen, but that evening I was driven to search LinkedIn, which I never do, and that’s where I found Sue Pike. I quickly emailed this person whom I had never met, never heard of, and didn’t have a clue about her ability.

Sue Pike is an Animal Communicator and a Reiki Master. Animal communication is something most of us do, although most of us don’t realize it. There are a few precious people who specialize in it and can actually communicate with a certain animal over hundreds of miles. Sue is one of them, although I truly didn’t know it at the time. I was in a panic because if I couldn’t get through to Peggy, she would die. After a couple of email exchanges, Sue asked for some pictures of Peggy.

I know a little about reiki, but only as it applies to humans. A Reiki Master worked on one of our horses’ ages ago and did wonders, but she moved away. Reiki Masters seldom hang around horse rescues, although I wish they would.

I sent Sue pictures, and she replied that she would work on Peggy the next morning. Of course, I was skeptical, but I was also aware that something had driven me to look for Sue.

Up early and fearful of what I would find when I came to Peggy’s stall, I walked into the barn. She was still standing, last evening’s food still in her bucket, water level unchanged. She didn’t bother looking up when I changed out her food. A few hours later I was back again and laughed with joy, then cried, when Peggy raised her head and nickered. She had eaten her small serving of soup! And she was actually looking at me for the first time!

An hour later, I was back in the office and saw an email from Sue. She had connected with Peggy and the healing process had begun.

“Initially, [Peggy] told me she wanted to leave her horse body,” said Sue. “She said that she was very tired. I asked her if she may be willing to try. She said maybe. But then I felt she was a bit hesitant, I told her not to worry, that her healing will be slow and steady, and on her terms. She liked that. (I felt it was important to empower her to make decisions for herself – not to feel ‘controlled’ by more humans). She said I don’t know, I can’t promise.”

From that start, Peggy’s life changed completely. Sue connected with her again a couple of days later and could tell that Peggy had changed to wanting a healthy body again. She wanted to get strong enough to get back out to the pasture and be with other horses.

That was a week ago. We weight taped Peggy on July 14th and she’s gained 27 pounds. We continue to feed her five times a day, she gets a bath every other day, mostly just to cool her off (skinny horses don’t handle heat very well), and her attitude has completely changed. She even pinned her ears at another horse when it got too close to her food bucket, a true sign of returning to normal horse behavior.

I don’t think I’ve raved about anyone in years, but I know, beyond any doubt, that Sue Pike saved Peggy’s life. I am amazed at the almost instant improvement and the healing that she did to a horse who had given up on life. Animal communication works, Reiki works, and the proof is the connection Sue Pike has with a slowly healing horse a thousand miles away. Thank you, Sue, for bringing life back to a beautiful soul.

If you’re interested in finding out more about Sue Pike, Animal Communicator and Reiki Master, you can find her through these links: