What’s Love Got to Do with It?

Habitat For Horses / breaking  / What’s Love Got to Do with It?
2

What’s Love Got to Do with It?

We’ve had a position open for our ranch staff for several months now. While I’ve posted the position on Craigslist and let a lot of people know that might run across someone that needed a job, the applicants we’ve received haven’t been the kind of folks that I think we need. It doesn’t take special skills to scoop poop, fill water buckets and put out hay. Most anyone is qualified for that part of the job. Where most people miss is the love, and I can pretty much see that right away when someone comes walking up to the barn.

Part of the application process is to halter a horse, and we don’t pick one of the wild bunch, just one that is sensitive to humans. It’s pretty telling when the horse walks away and the applicant has to figure out what to do. Those stories of, “I’ve been around horses all my life,” fade away fast when they throw the halter down and storm off. (For those who don’t know, most “friendly” horses will walk off a few times, then stand still to be haltered, especially if someone speaks in a soft voice) 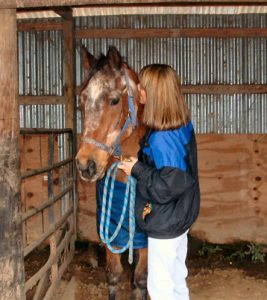 There is one young lady that I would hire immediately – Nicole Graham. Without a single doubt, she has a position with us whenever she wants, based solely on the fact that she loved her horse enough to stay and fight for his life.

If you haven’t read the story, it’s here.

She and the horse survived.

That kind of love isn’t as rare as you might think.

There probably isn’t a fully functioning equine rescue around that doesn’t have a zillion war stories, some far more intense than most want to hear. It takes accepting blood, guts and tears as part of our daily life to be in this business. No matter what anyone says, winning is everything when we’re on the job, because losing is simply unacceptable given that with enough effort and desire a life might be saved.

I’ve witnessed the heroic efforts of animal people doing everything they can to save lives in some of the most horrible situations you might imagine, people that came from all over the country for one reason – animals were in trouble. No one asked how much they were getting paid, no one refused because they didn’t get 2 weeks vacation. The animals needed them – that’s all they needed to know.

I wish I could say that our own ranch staff gets their inspiration from me. They don’t. They get it from the love they have for the horses they serve. That’s something that no amount of money can buy. It was there before they started working for us. That quality that makes the difference between a great employee and someone who is there to collect a paycheck comes not from learning, but from deep within one’s soul.

I wish I could put that question on the application: “Would you stand in quicksand for three hours next to a panic-stricken horse on the one in a hundred chance that you might save him?” There is not one employee at the ranch who would say no. That’s devotion.

That’s what love has to do with it.