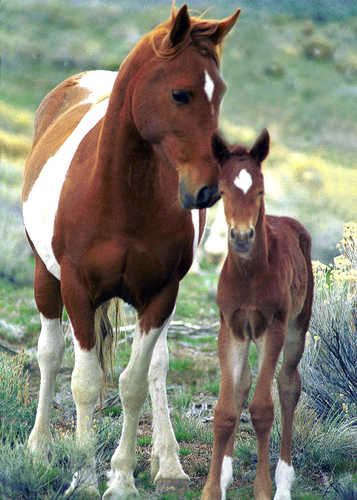 Some humanity is being shown to the wild horse herds left in Utah. The cattle ranchers have graciously (tongue in cheek) allowed the foals to get a bit older before they round them up and ship them off to who knows where…

Now if only we could get them to understand that getting rid of the wild horses will not help their situation. But voices of reason are rarely listened to. ~ HfH

From: The Salt Lake Tribune
By: Kristen Moulton 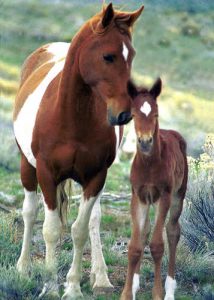 Iron and Beaver counties are backing away from their plan, at least for now, to round up wild horses that compete with livestock for scant feed on the parched southwestern Utah ranges.

Iron County Commission Chairman David Miller and Beaver County Commissioner Mark Whitney say they’ll wait until after the foaling season ends June 30 to decide whether to take matters into their own hands.

Meanwhile, the Utah office of the Bureau of Land Management has requested several hundred thousand dollars to round up more than 700 horses in the two counties this summer.

But those requests are competing for funding with others from throughout the West that would amount to removal of more than 6,000 federally protected horses.

Angered that the BLM had millions of dollars to spend going after Nevada rancher Cliven Bundy’s cattle — but few resources to control wild horses in southwestern Utah — Iron and Beaver counties this spring threatened to round up horses themselves if the BLM won’t do so.

Estimates of the number of wild horses in Iron and Beaver counties vary widely, from 1,700 to several thousand. The BLM itself has set 601 as the maximum number of horses, spread across nine herd management areas in the two counties, to maintain a healthy range for all wildlife, cattle and for multiple uses.

The counties and BLM agreed that they would try to capture some wild horses in temporary corrals on private property when the horses came in for a drink of trough water. Nearly three weeks later, not a single horse has been caught, however.