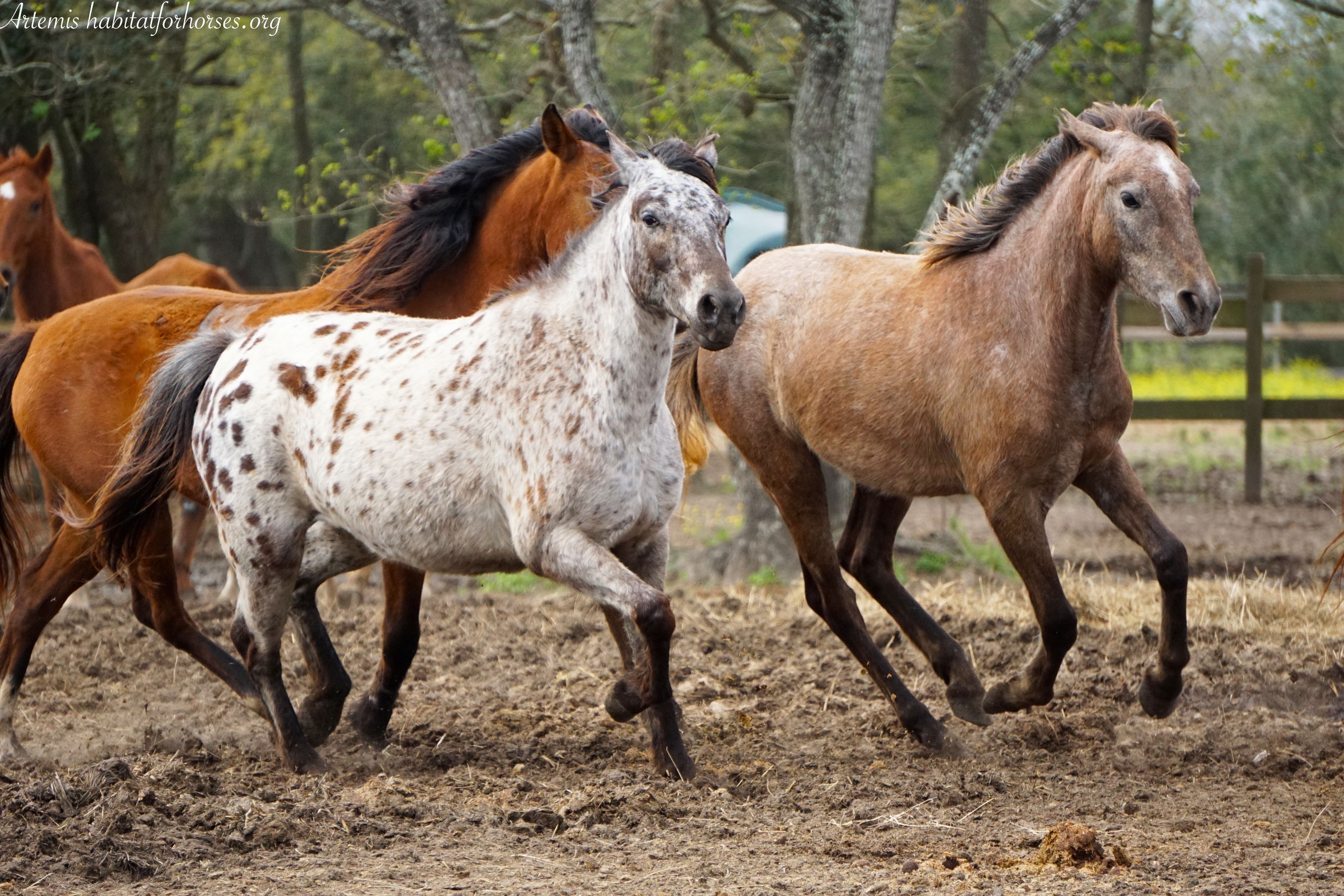 The police detective sat in the driver’s seat of the town’s new Crown Victoria, punching the keys on the dashboard computer. Two other units pulled up. Warrant in hand, we approached the junkyard house. No one answered. It wasn’t necessary to serve them, attaching the paperwork to the door did the job.

In the trash-filled lot close to the house stood three emaciated horses: a gelding, a mare and a miniature gelding, all thin enough that one could easily count their ribs. As we attached lead ropes to them and led them to the trailer, the neighbors came out to watch. More than a few thanked us.

Fifteen minutes later we shook hands with the law enforcement officers, made plans for the court date and took the horses to our ranch.

A Sheriff Deputy from another county asked us to look at a group of horses that looked malnourished: more miniatures, some with hooves grown far too long, manes and tails knotted, and bones barely covered with skin. The owner seemed truly overwhelmed and admitted that things were out of hand. We took four off her hands and offered to help if she followed directions and did as we requested. She received the instructions – feed, hay, get the feet trimmed. The Deputy helped us load the little guys into the trailer.

A phone call from a police officer in a town in East Texas about a seizure they just completed. Could we take a few more donkeys? She would bring them down.

Two counties over – two extremely thin horses in the pasture – one of them with a very swollen leg, unable to walk. The local vet already put the third horse down. Could we bring the trailer?

All this within the last two weeks.

During the same period, we took a call from a person who complained that law enforcement was ignoring a dangerous situation involving a horse tied to a tree. “I call them every day and nothin’s being done,” she complained.

I spoke with the officer handling the case. “The horse is in excellent shape,” he told me. “The owners are having the fence line redone in the pasture, so in a few more days that horse will be back where he belongs. I explained this to the neighbor. She just doesn’t want the horse where she can see it.”

Almost every one of the horses and donkeys that come through our gates is here because of the efforts of law enforcement. Their attention became focused on the animals because of a possible violation of the animal cruelty law. Admittedly, there are a few cops that ignore a plea for help, but 99% of them will go far out of their way to help an animal in trouble.

It wasn’t that long ago that I was at one of the most nightmarish scenes of animal cruelty I’ve ever witnessed. Without going into ghoulish details, it was the work of someone who enjoyed causing extreme physical pain to horses.

With the animals safely removed, with the bad guy on the way to jail, I walked the property with a detective, looking for more evidence. After another hour, we were done. We shook hands and walked back to our cars. I saw him drive off as I sat in my truck finishing up my notes.

After five hours of being professional, I was alone at last, and the gasket blew. I screamed, cried and let it all out, hit the dashboard so hard that it cracked. It was a good ten minutes before I had it together enough to drive.

A half -mile away I saw the police unit parked on a dirt road. Thinking that something might be wrong, I pulled up beside it. The detective looked at me with tear-stained eyes. We both knew, we both understood. I nodded and drove off.

You can only hold back for so long, and cops are no different. Despite maintaining your composure and doing your job while witnessing bloody bodies, rapes, unimaginable death in car wrecks and bullet holes in blown-apart heads, it still gets to the point where the emotions can no longer be controlled. The bloody remains of a once-perfect horse put both of us over the edge.

The blue line is composed of white, black, Asian, Hispanic, men, women, straights, gays – they are just like us, except they put their life on the line every single time they put on a uniform. That’s a big difference.

Bad guys are in prison, drunks are off the road, we feel safe at gatherings, traffic laws are enforced, and our horses and donkeys owe their lives to the efforts of peace officers. This organization would not exist but for their efforts to protect the lives of these animals.

Yes, there are police officers and politicians who hang on to raging contempt for anyone not white, straight and male. Those beliefs are held by carpenters, steelworkers, insurance agents, people in all sorts of occupations. None of them realize that the world is moving on, that their beliefs are of a time long past and will never rise again.

They live in a world of hate and mostly end up hating themselves. They are the same people that we take to court, for animal abuse is tied to their behavioral patterns. “Haters hate,” as the saying goes.

The next time you see a cop, give them a thumbs up. Show that you support them. If you see one trying to grab a quick bite in a restaurant, pay their ticket. Your life might very well depend on the quick actions of one of them. You never know ….

What I do know, beyond any doubt, is that the lives of each one of our horses, all 340 of them, depended on the efforts of a law enforcement officer who saw something they didn’t like and took action to correct it. That in itself is a powerful testimony to the caring and concern each of them feel.

And for horse people, do something special tonight – hold your horses. Really. Go out and hold them tight. If you don’t have a horse, borrow one for a few minutes. Hold them and say a prayer for the officers who lost their lives, for the families torn apart, for the kids that will never again see their parents. Hold your horse and pray that this hatred will stop, that we will all be drawn together instead of being ripped apart.

Give thanks for the thin, blue line. “And maybe remind the few, if ill of us they speak that we are all that stands between the monsters and the weak.”