Theodore Roosevelt National Park officials to round up horses, auction them

Habitat For Horses / breaking  / Theodore Roosevelt National Park officials to round up horses, auction them
5

Theodore Roosevelt National Park officials to round up horses, auction them 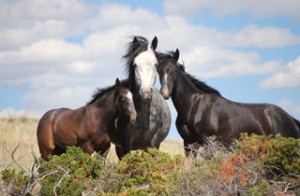 From The Dickinson Press
By Katherine Lymn

MEDORA – Theodore Roosevelt National Park officials will round up horses and auction them next week in its continuing effort to control the population and prevent overgrazing.

For horses, which stay within the park’s boundaries, the park is not actually that big. The South Unit’s 46,000 acres need to be protected to prevent resource damage, like overgrazed grass, officials said. 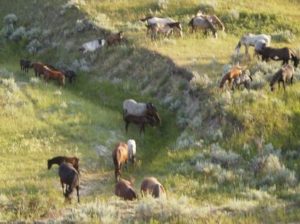 “Once you have resource damage it’s really difficult to fix it so we don’t want to get to that point,” said Eileen Andes, the park’s chief of interpretation.

To preserve this balance, the park has conducted more than 25 horse roundups since 1954. This roundup will sell about half the park’s horses, lowering the population to about 100.

Officials will use a helicopter to herd the horses into a broad area that narrows into the unit’s wildlife handling facility, where a veterinarian checks their health.

“The objective is to keep the horses as calm as possible because when they’re calm and we’re calm … there’s less of a chance for any injuries to horses or staff,” Andessaid.

A group of volunteers, familiar with the horses’ markings and their bands, count the park’s horses. They know “generally who associates with whom,” Andes said.

Organizations are working to find buyers that would give the horses safe homes, which hasn’t always been the outcome.

The park’s last horse roundup, in 2009, led eight of 77 auctioned horses to wind up on the “kill market,” where horses are bought for slaughter.

“Just like most people, we would like to see the horses go to good homes,” she said.

In the past, the horses have sold for between a couple hundred dollars and “considerably more,” she said.

Depending on the results of the roundup, the park expects to auction 35 to 40 foals, 25 yearlings, 25 two-year-olds and 20 three-year-olds.

In the meantime, the park is continuing an experimental contraceptive study. Starting with the 2009 roundup, park officials gave contraceptive shots to mares, which seemed to wear off in the time since.

If the contraceptive works, the park may use it to limit the population in the future, reducing the need for roundups, park Superintendent Valerie Naylor said in a press release.

“Our aim for the park is to maintain our wildlife populations for the public enjoyment but also to protect the resource,” Andes said, “and that’s a balance that we have to continually work on.”

The roundup will take place Monday and Tuesday, depending on the weather.

Patrick Springer contributed to this report.