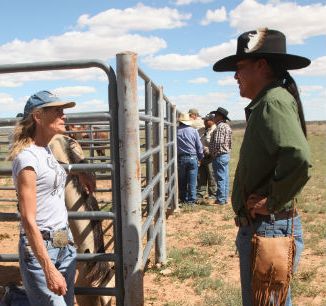 Celebrities are fighting it, deals are being brokered, and two proposals are sitting in Congress to end it. So why are horses still being slaughtered in droves?

From: Esquire
By: Leslie Macmillan

BLACK MESA, Ariz. — The West is on the verge of a wild horse crisis, according to the Feds. An estimated 33,000 roam freely on public lands and even more on tribal lands. Under a 1971 law, the Bureau of Land Management is supposed to protect these horses and control their numbers so that they don’t ravage grasslands or die of starvation.

Photo by Leslie Macmillan
Wild horses roam the mesas of Monument Valley on the Navajo reservation.

But critics of horse roundups contend they are a profit-driven enterprise sanctioned by the federal government and driven by business interests like cattle ranching and extractive industries that want to clear land for development.

“The only way to get at those resources is to get rid of the horses,” said Navajo activist Leland Grass. He has been trying to stop roundups of horses, which are often bound for Mexican slaughterhouses, on the Navajo reservation.

Navajo Nation president Ben Shelly recently made national news, saying he had reversed his position on horse slaughtering and ordered a moratorium of the roundup of horses on the reservation. Actor Robert Redford and former New Mexico Governor Bill Richardson, who have formed a foundation to protect wild animals in the West, brokered a deal with the nation’s largest Indian tribe to find humane alternatives.

“It’s a big lie,” said Jeanne Collom, a horse buyer who said roundups are still taking place on the reservation, and she has been buying them.

This was confirmed by Erny Zah, director of communications for the Navajo Nation, who said roundups will continue until an agreement is signed between Richardson’s group and the tribe.

On a late September afternoon, the scene at one roundup on the reservation was chaotic as teens chased horses on ATVs and dirt bikes into corrals. Collom said she buys horses for just $20 a head.

“The population is growing and the range is shrinking,” said Elmer Phillips, the head ranger for the Navajo Nation. “What comes along on the range nowadays is a different kind of creature: most of these horses are inbred and under 700 pounds.”

But critics say the data the policy is based on comes from an environmental impact study commissioned by Peabody Energy in 2008 as part of the permitting process to expand a coal mine it operates on Navajo land. The coal mine fuels the Navajo Generating Station power plant, which is majority owned by the U.S. Interior Department. Interior oversees the BLM, the agency responsible for managing wild horses, and the Bureau of Indian Affairs (BIA), which issues grazing permits on the reservation and contracts with horse buyers, including “kill buyers,” who buy horses bound for slaughterhouses.

Asked whether that study informed the horse policy, Zah said, “It’s definitely part of it.”