“…the spring of hope, the winter of despair….”

Habitat For Horses / Reflections  / “…the spring of hope, the winter of despair….”
0

“…the spring of hope, the winter of despair….” 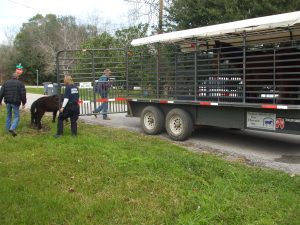 “…the spring of hope, the winter of despair…..”

The police detective sat in the driver’s seat of the town’s new Crown Victoria, punching the keys on the dashboard computer. Two other units pulled up. Warrant in hand, we approached the junkyard house. No one answered. It wasn’t necessary to serve them, simply attaching the paperwork to the door did the job.

In the trash filled lot close to the house stood three emaciated horses; a gelding, a mare and a miniature gelding, all thin enough that one could easily count their ribs. As we attached lead ropes to them and led them to the trailer the neighbors came out to watch. More than a few thanked us.

A complaint from someone in another small town asked us to look at a group of horses that were not being fed. More miniatures, some with hooves grown far too long, some unkept and bone thin. The owner seemed truly overwhelmed, fully aware that things were out of hand. We took four off her hands and offered to help if she followed directions and did as we requested. She received the instructions – feed, hay, get the feet trimmed. 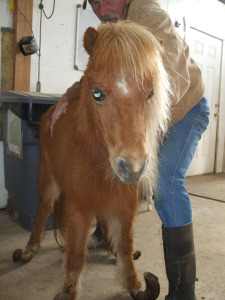 Two counties over – two extremely thin horses in the pasture – one of them with a very swollen penis. The local vet already put the third horse down. Could we bring the trailer….?

All this within the last two weeks.

Before one of you pro-slaughter slobs start spewing out garbage about, “See? If you liberal tree-huggers hadn’t closed the slaughterhouses…,” let me take a moment to invalidate your automatic, jaundiced reactions (That ought to slow them down, although they’re still wondering who the heck this “Charles Dickens” character is. “He’s probably one of them friends of RT Fitch.”) 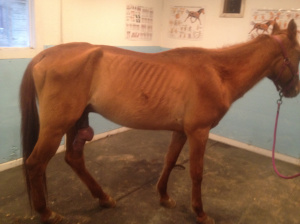 In our ICU hospital

Each one of these equine came through the gate as a result of neglect from its owner. The neglect was not caused by the lack of access to a local slaughterhouse, rather is was caused by the lack of sensitivity to the life of another living creature. That lack of sensitivity is EXACTLY the same as that shown by the pro-slaughter minions – which all seem to be like mindless robots programmed to spew out the venom of hate towards anyone that even remotely gives a damn.

Almost every animal that passes through our gate does so because of the efforts of a law enforcement agency. Their attention was drawn to the animals because of a violation of the animal cruelty law. In other words, if we didn’t have people who abused and neglected their animals to such a degree that it was breaking the law, we’d be out of business. (What a dream that would be…!)

While our promise to law enforcement is that we will accept what they seize and we will support them in court with evidence and testimony, the sudden influx of equine presents three very real problems:

Three horses died last week. None of them would have died had the previous owner assumed any sense of responsibility. It didn’t have to end as it did and to people 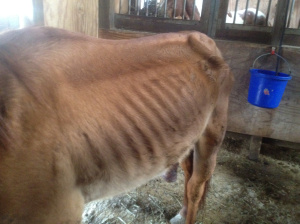 “Accept no excuse” style of starvation

that care, that’s hard to accept. We look at the incoming horses with snowshoe hooves, knotted manes and bodies that look like skin spray painted over a skeleton. Far too often we’ve cut off halters that have grown embedded in the skin, hand fed those too weak to eat, used the sling for those too weak to stand and held close those who struggle to take another breath.

Meanwhile, there are forces around us that support everything we do, and others who want us gone. It’s an interesting battle that would be far more interesting if I were not so deeply involved, because on my level, it’s personal.

Come stand by my side out in a muddy pasture far past midnight, hold the flashlight while we look at a starved horse in the final struggle with death, help me hold the horse’s head while the vet tries to find a vein, then listen to someone say something really stupid like, “This wouldn’t have happened if them slaughterhouses had stayed open.”

Just as this is the season of Light, it is also the season of Darkness. The ASPCA’s poll shows that 80% of the American people are against horse slaughter, while only 8% think it’s necessary. The media continues to post the lies of the leaders of that 8%, who are leaders only because they are the beneficiaries of the money produced by killing horses for their meat.

“The epoch of incredulity…” comes when you realize that the new, main, number one spokesperson for the slaughter crowd is Rep. Sue Wallis, who is a Representative only in the the Wyoming State legislature, not in DC, put there to represent a county (Campbell) of some 39,000 people. Sue comes from Recluse, Wyoming, total population of 13. She never owned a horse, wouldn’t know a colic from a choke, yet she somehow became the national spokesperson for every pro-slaughter organization and the media somehow actually believes her.

While it might well be “the winter of despair,” the “spring of Hope” is coming fast. It needs to, because I’m just not willing to let it continue as it always has. These animals are far too precious, their lives a gift that we should hold and treasure, not throw away like so much trash.

I’m asking you to do two things – help us financially. We can’t do this, we can’t continue, without your financial support. If what we do is important to you, if you truly feel that we should be helping these horses, then please do more than say, “Good job.” A few dollars a month would mean far more than you might ever realize. 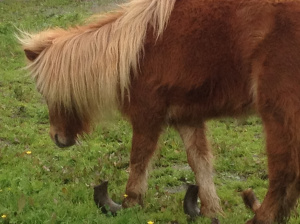 Ask them for forgiveness.

And the second thing? Hold your horses. Really. Go out and hold them tight. If you don’t have a horse, borrow one for a few minutes. Hold them, ask them to forgive us and let them know that we know we need to do better. We are failing miserably at the “dominion” part of God’s request to taking care of His creatures. They don’t need the media or the internet to tell them, they already know.

Let them know that 80% of us care, that we’ve been silent far too long, that the voices are rising, the spring of Hope is coming.

Just as it says on my bracelet, we will stand together “until they are safe.”