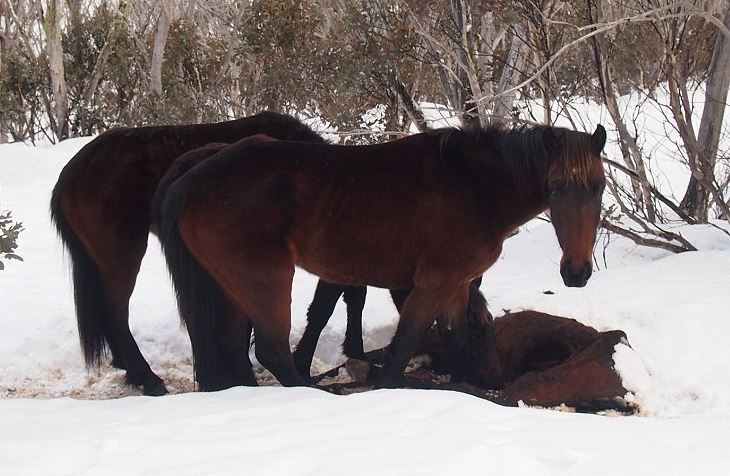 In my opinion – Horse haters are a vicious bunch of brainless sub-humans, operating on the same level as ISIS warriors. Completely sociopathic, they have no ability to think beyond the enjoyment of playing around in the blood of the humans and animals they kill. This article is a waste of your time. It is also a complete waste of the paper and ink used to print it. The only value is to show`how low the horse haters will go to justify the cruelty and killing.

Sadly, these “people” are typical of those who promote horse killing here in the States, including a number of elected US Representatives and Senators. Pure, ugly, vicious hatred – with no basis in any reality. They make up lies, get some “authority” to say the words, then expect the public to believe it. Even more frightening, the public does believe it.

The shocking moment ‘cannibal horses’ eat one of their own in the Australian Alps… as the desperate, starving animals overwhelm the mountains

They are noble Outback creatures, iconic of the Snowy River.

But a pair of Canberra men on a camping trip to Kosciuszko National Park last month were left stunned when they discovered a small band of starving brumbies feeding on another horse’s flesh.

In the words of witness Dr Don Driscoll, the wild horses ‘had turned to cannibalism’.

Ecologists Dr Driscoll and Dr Sam Banks first noticed the dead horse, which had a huge hole in its abdomen, on the way up the hill from Dead Horse Gap, in the national park located between New South Wales and Victoria.

It’s intestines appeared to have been nibbled out. It wasn’t clear what could have caused the damage.

‘I had no idea what could’ve done that,’ ecologist Dr Driscoll, from the Australian National University, told Daily Mail Australia.

But the culprits became clear the next day, as the campers headed back down the hill.

Three emaciated horses stood near the dead brumby. Two had shoved their snouts inside the fallen creature’s abdominal cavity

‘They were biting at what was left of the insides… They were obviously starving.’

Horses are herbivores, but Dr Driscoll supposed the horses had been pushed to the edge.

He said he witnessed one of the brumbies bite part of the cavity and pull it off.

‘I suppose desperate times call for desperate measures in the horse world.’