The Last of the Real Cowboys

Habitat For Horses / breaking  / The Last of the Real Cowboys
3

The Last of the Real Cowboys 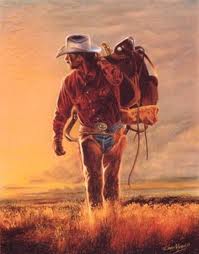 This was originally published a couple of years ago on our old WordPress blog, but Jerry’s words still ring strong and true today. ~ HfH

The Last of the Real Cowboys
By: Jerry Finch, President of Habitat for Horses

I’ve known a lot of ranchers in my life; good, honest men with a work ethic born of pride in the job they do, men who think nothing of rolling out round bales of hay in minus 20 degree weather, who would go out in a rainstorm and bring an abandoned calf into the barn and bottle feed it for days on end because, “he deserves a chance.” On the flat plains of north Texas, life on the range could destroy the weak, but for those who persevered it could turn them into the very best of the human race.

A Cowboys Way of Life

Back in the early days of my youth, I thought that all real men held those values. I was proud to ride horses beside them, to be considered one of them, even if it meant an occasional joke about me being just a kid. I’m sure there were bad guys, I just didn’t know them. I knew there was horse slaughter back then, too, but the cowboys I knew would have nothing to do with it.

One hard, thin old man called me over one day and, holding a horse, said, “Look at this horse and tell me what you see, boy.”

I’m sure I said something half-hearted, but his response is still with me. “If you have a clean heart, when you look into his eyes you will see the face of God. You respect what’s inside that horse, boy, and the horse will always respect you.”

A few weeks later, when school was out for the summer, he offered me a job. Being a new teenager, I thought I knew a lot, but the bottom line on horses is that talking doesn’t account for anything. It’s the doing that gets the job done.

The first day I walked up and met the ranch foreman. He was a weathered old cowboy that could cuss more in 30 seconds than most sailors could do in a lifetime. The day I started he pointed to the corral holding about 10 horses and said, “Whatever horse you catch is the one you ride.” Nine other cowboys walked out with me to the corral, each caught a horse within a few minutes, saddled up and headed out to work the cattle. I was left alone with a mare that had absolutely no love for humans.

The old man did nothing more than stand on the porch, watching. Not a word escaped him as I followed that horse around the corral for what seemed like two hours. Once I sat down, fed up with the horse, mad at myself and disgusted at the world.

“I guess you think that horse is gonna’ put the saddle on by herself?” he said, leaning against the porch post. I stood up, dusted myself off and started again. Another two hours passed and, to my complete surprise, the horse walked over to me and stood still as I put the lead rope over her neck, put on the halter and led her to where I had the saddle. Another five minutes and I was sitting on her, fully expecting to hear the old man laugh at me and tell me that he didn’t need me anymore.

He didn’t. Instead he opened the gate to let me through and said words that I carry with me to this day, “You didn’t give up. That’s the kind of person we need.” That was the first day of my first real job at age 14, a cowboy, working with men who had been doing it their whole lives. I value those memories as if they were gold. And those men? They are rare today. I’m sure a few still exist. I might see one or two a year, but it’s a dying breed, replaced by the white hats, white starched shirts and bolo ties of citified “cowboys” who work at the American Quarter Horse Association, headquartered in Amarillo, the town where I grew up. What few still exist gather on occasion at the Texas and Southwestern Cattle Raiser’s Association, an organization designed to “Honor and Protect the Ranching Way of Life.”

Both of those organizations promote the commercial slaughter of horses. Neither organization ever polled its members to see if they agree.

Neither has the American Veterinarian Medical Association or the American Association of Equine Practitioners. No votes, no poll, just those in power taking the position that they know what this country needs more than the membership and thus will dictate what is to be believed.

The Cattleman’s Association spread the word that giving in to those “damn animal activist” and stopping horse slaughter is the start of a “slippery slope” that will lead to the end of all animal processing in the US and the total and complete destruction of the “American Way of Life.” Ignoring the fact that 80% of the population is against horse slaughter and could thus be considered as “animal activist,” and that the vast majority of that 80% of the American population drives the market for beef, pork and chicken. The ranchers somehow bought the story because the Association told them so.

Same with the “personal property” argument. “Those horses are your personal property. Are you going to let those left wing sickos tell you what you can and can’t do with your own property?”

And the reason they spend so much time and energy trying to convince the ranchers and the rest of the public that horse slaughter is necessary is because ….

… neglect and starvation are increasing because the slaughterhouses closed down and we need horse slaughter again.

… massive numbers of horses are being abandoned all across the nation.

… old horses are left in pastures to starve to death.

… the trip to Mexico and Canada is too long and they are concerned for the welfare of the horses.

… too many horses are untrained and dangerous and we need a way to get rid of them.

… no one wants old, sick, injured horses so the best way to dispose of them is to send them to slaughter.

… the American public needs our help to rid ourselves of all the unwanted horses.

One after another, the stories continue. Without any factual basis, stories made up in the boardrooms and promoted throughout the network to end up as facts in newspapers and magazines and discussed in the annual meetings.

Don’t dare dig too deep, don’t disturb the cover story, because under all that glitter of authority is something very ugly, something that doesn’t do well in daylight, something never even whispered. It crawls through the slaughter industry like fat maggots, feeding on the putrid lies and deceit of pure evil.

The face of horse slaughter is uncontrolled abuse, naked hatred of living animals, lust for money no matter how much it is soaked in blood and guts.

Here’s something you should listen to, the words of a trucker who got stuck hauling horses to the border to be slaughtered.

A quote from a killer-buyer, ““We shoot them full of steroids to beef them up so we can get more for them at the slaughterhouse.”

From another killer-buyer, “If they start kicking, we poke their eyes out. That calms them down real fast.”

“We don’t need paperwork. We have a ton of it.”

“We travel at night so we don’t get stopped. We’re suppose to have health certificates going into Texas but hell, they never stop us.”

“The reason you see skinny horses wandering around? We dump them on the way. They only want fat, young horses. Taking something old or skinny is a waste of time.”

So this is the best that the horse slaughter industry has to offer. These are the only logical, valued, bold statements the industry can produce, and that I’m sure they make one proud enough to stand up and say, “I believe in horse slaughter!” in front of the kids, in public.

In the darkness of the night the horses are crammed into trucks – shocked, beaten, terrified. We trained them to respect us, to trust us, to believe that we will protect them, yet in their final hour we betray them, we turn our backs to their screams. In the horror of their death, we count the bloody dollars we’ve crammed in our pockets. This is what the American cowboy has become. All for the love of money.

Now I ask you this – who is destroying the “American Way of Life”? Is it the 80% of us who are against horse slaughter because we value an animal that is so unique in God’s world? Or is it those who value the crumpled dollars in their pockets more than they value any connection to another living creature?

Is it the politicians who support the American Horse Slaughter Prevention Act, who have ignored the pledges of the lobbyist and the pats on the back of the big organizations who want a way to dispose of their horses, or those politicians who accept the “donations” and agree that horses need mercy killing and do everything they can to kill the bills in the Senate?

A few months ago I was at the vet clinic with one of our horses. There was a stereotypical old cowboy before me, weathered face, worn-out body, bowlegged, holding on to an aged horse that was obviously in pain. Doc did the usual, but the belly was swelling fast, a sure sign that the intestines just ruptured. Doc looked at the cowboy and shook his head.

That old cowboy heaved over in tears. He loved that horse. It was his friend, his best buddy, his partner, and letting go was just as hard as it would have been letting go of a child. That was one of the last real cowboys I’ve seen. 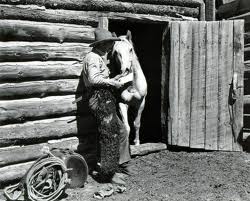 If you want to rant and rave about how horse slaughter is necessary because of X, Y and Z, face up to the fact that we both know the truth. It’s only about money. It’s about the 1% of the horses in this country that the wealthy in Europe want to eat and for which they are willing to pay, and it’s the very small number of people in the US who are hell-bent to provide the horses and feed the slaughter machine, all for the love of money.

There is nothing else involved.