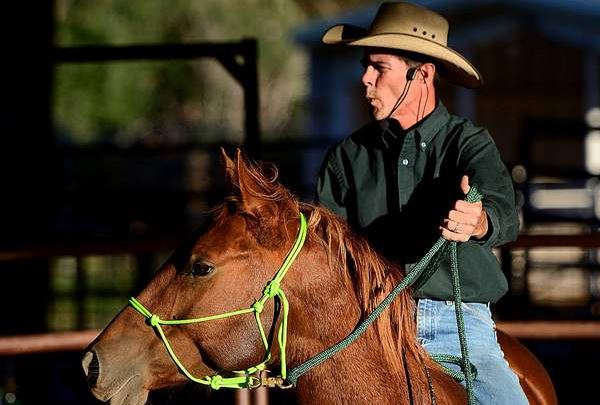 From: The Durango Herald
By: Brandon Mathis

The Colt Starting Challenge USA wrapped up two days of competition in Durango on Saturday in the La Plata County Fairgrounds covered arena.

Photo: Steve Lewis/Durango Herald–
Rhett Fincher of Pagosa Springs, who is given to whistling while he works

In the competition, four young horses – which have had little, if any, contact with humans – were introduced to a different kind of trainer – those with a knack for gaining the trust and confidence of the animal while eschewing the traditional methods and implements. Instead of spirit-breaking rodeo cowboys, these are the real horse whisperers – people with a quiet, natural ability to communicate with young, nervous animals.

It’s called natural horsemanship. Trainers are judged on their ability to make progress with the horses. Twenty competitions will lead eight finalists to Las Vegas for the title.

Cristy Beatty, who founded the event with her husband, Russell, said it is an astonishing display.

“The audience is amazed at what they see,” she said.

“We don’t use spurs, twitches or hobbles,” he said in a press release about the event. “What we do is through natural horsemanship training. We use a horse’s natural instincts and communication. The horse wants to do it because of you.”

At 20, Sundquist’s success is a testimony of natural talent – an ability to understand and influence. There is no abuse, like a gouge to the rib cage.

On Friday, Rhett Fincher of Pagosa Springs whistled to help calm his gelding, Ollie, an anxious quarter horse from Mancos. Watching in near disbelief, Chris and Polly Kloster and their daughter Emily, Ollie’s owners, were moved by the gentle approach Fincher applied, transforming an unpredictable, sketchy beast to a still animal at ease.