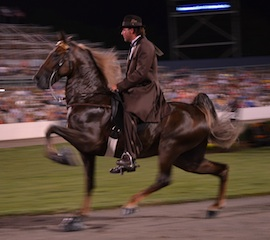 Chad Sisneros/The HSUS
The ‘Big Lick’ gait is induced by injuring the horses to make them step higher.

Today, the Prevent All Soring Tactics (PAST) Act reached a new threshold of Congressional support. Rep. Trent Franks, R-Ariz., became the 100th House Republican cosponsor of H.R. 1518. There are also 176 House Democrat cosponsors, making a grand total of 276 as of now. The Senate bill, which has already passed the Senate Committee on Commerce, Science and Transportation, has the bipartisan support of 52 cosponsors.

The PAST Act, authored by U.S. Reps. Ed Whitfield, R-Ky., and Steve Cohen, D-Tenn., in the House, and Senators Kelly Ayotte, R-N.H., and Mark Warner, D-Va., in the Senate, seeks to upgrade the Horse Protection Act (a federal law that has been on the books since 1970) and crack down on the illegal, inhumane and all-too-common practice of horse soring. This torturous training method involves the chemical or mechanical injuring of the hooves or legs of Tennessee Walking Horses and related breeds to force them to perform an exaggerated gait known as the “Big Lick” in the show ring.

On Friday, the Congressional Budget Office released its cost estimate for the PAST Act and concluded: “Enacting S. 1406 would not affect direct spending.” In other words, opponents who’ve bellyached about how this legislation would cost taxpayers upwards of $20 million per year are blowing smoke. The PAST Act will simply enable the U.S. Department of Agriculture (USDA) to redirect its enforcement efforts and resources in a more efficient and effective way to finally put a stop to this heinous cruelty.

There’s competing legislation in play now, with a relative handful of senators and representatives behind it. But it’s not designed to pass – just to confuse and slow down progress on the PAST Act. To me, it’s basically the same as lawmakers seeking to slow down a bill to responsibly upgrade the federal law against dogfighting and cockfighting. Horse soring is a crime, and it’s shocking these legislators are standing in the way of apprehending organized criminals who are knowingly violating federal law and torturing horses.

The Senate authors of the PAST Act recently issued key facts about the legislation for the debate in Congress, and I thought they are worth repeating.

Fact: No horse naturally walks with the absurd, high-stepping “Big Lick” gait, literally trying to walk more on their hind legs, and with four-inch stacks and chains on their feet. The gait is induced by injuring the horses and putting “action devices” on their feet in order to cause them even more pain, and make them step higher. Of all the many types of horse competitions, the “Big Lick” is the only case where individuals render the animals unsound and unnatural.

Fact: The “Big Lick” segment represents a very small faction of the Tennessee Walking Horse, Racking Horse and Spotted Saddle Horse breeds; for example, according to the USDA, only about 5.7 percent of the estimated 200,000 Tennessee Walking Horses are even shown, and a fraction of those would be affected by the PAST Act. There are “flat shod” competitions that occur every week across North America, and these competitors do not use action devices or large stacks to show their horses. The prevalence of soring is harming the industry more each day, as participants and attendees become warier of being associated with an industry that refuses to crack down on soring.

Fact: A recent analysis of the violation history of the top 20 trainers in the industry’s 2011 Rider’s Cup award program found that every trainer on that list was cited for soring violations in the previous two years, with an aggregate of 164 citations among them. Only seven percent actually served industry-imposed suspension penalties – and of those, all but a handful were for a mere two-week period. Many of the show judges also had records of soring violations. And, despite claims by the “Big Lick” advocates of a 98 percent compliance rate, at the 2011 Tennessee Walking Horse National Celebration, USDA inspectors found that nearly every horse randomly chosen there tested positive for prohibited foreign substances applied to their pasterns – an indicator of soring.

Fact: The American Association of Equine Practitioners and the USDA Inspector General have called industry self-regulation a failure, and recommended that it be abolished. The vast majority of violations of the Horse Protection Act cited are detected at a small percentage of shows where USDA-trained veterinary medical officers oversee the work of industry inspectors. A program grounded on self-regulation has enabled soring to continue at an unacceptable level.

Fact: The executive committee of the Tennessee Walking Horse Breeders’ and Exhibitors’ Association favored the PAST Act, as did a straw poll of members, but a recent shift in leadership of the group led to a reversal of the vote. The reality is, just about every major equine organization favors the PAST Act, including the American Horse Council, whose mission statement is to “promote and protect the equine industry,” the American Association of Equine Practitioners, the U.S. Equestrian Federation, the American Quarter Horse Association, as well as most major breed associations and many Walking Horse groups. The Humane Society of the United States, the American Veterinary Medical Association, every veterinary medical association and the National Sheriffs’ Association have all endorsed the PAST Act. Only a few self-interested “Big Lick” groups in the Walking Horse industry oppose real reform.

Let lawmakers know you care, about horses, about stopping organized crime, and about real reform, and that you want the PAST Act passed.