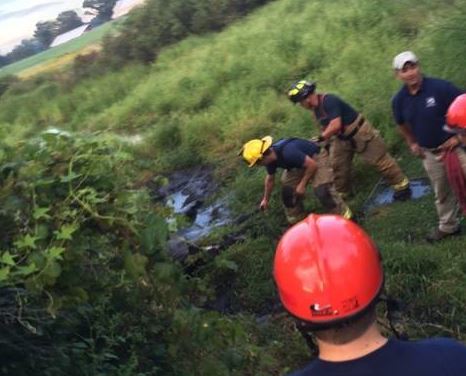 While some of us at Habitat for Horses had received training in large animal emergency rescue several years ago, it’s time to get the new employees trained. Early Monday morning, four of our staff will be attending the training sessions being held at Sam Houston Racetrack in Houston. Not enough first responders know what to do when a trailer full of horses flips over on the highway or when a horse falls into a canal with steep sides. Pulling a horse out of mud doesn’t work like you might think. If not done correctly, the horses legs could be pulled off by the suction of the mud. Everyone is thankful for the efforts of this fire department: 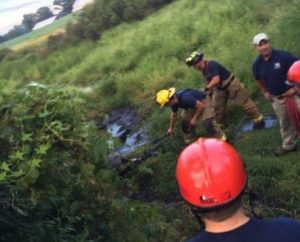 HOWELL, Mich. (WXYZ) – Right now, an animal rescue has a lot of people buzzing on social media. Firefighters, whose quick action helped reunite a Howell family with their horse.

They got the call of a young four legged damsel in distress, and they deployed all of the equipment and men they thought they would need to get the job done.

It happened Thursday. The horse’s owner called, hoping crews could rescue the horse who awndered off and found herself in a muddy mess.

When they got there, they knew they needed more men. The horse had been fighting for 15 minutes, and dugherself deeper into the mud.

For more information on the course, and to join, go to: