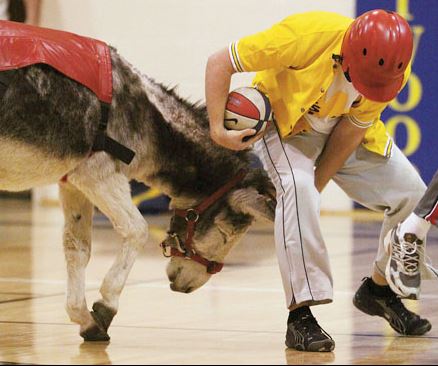 The article on donkey basketball had been up for all of 20 minutes on Habitat for Horses website when I received a call from someone about a proposed “game” in the Houston area. It seems that a candidate for County Commissioner of Pct 2 in Montgomery County, Charlie Riley, thinks it would be a great fundraising event to benefit some senior citizens, perhaps inspiring them to vote for him.!!

To reach that goal, he enlisted the help of Magnolia Jr. High School so his self-promoting fundraising event can be held in their gym on February 11th at 7:30 pm.

Riley calls himself a conservative that wants to represent the good folks of one small area in Montgomery County, and that’s all fine and dandy. My question is – do you need to do it by demonstrating reckless and abusive behavior towards animals? Sure, it might be funny to see someone get bucked off, but are you aware of what happens behind the scenes when a donkey ends up crippled, or worse yet, with a broken leg.

These people that set up donkey basketball games around the country do it for one purpose – money. The donkeys are trucked all over the country, crammed in trailers, with little to no rest. An agitated donkey puts on a better show, one that is denied hay and feed won’t poop on the basketball court and when the “game’ is over, the owners fold their money, stuff it in their pockets and head out to another show. !!

Leaving kids thinking that animal abuse must be perfectly okay.


The abuse you see on that court isn’t okay. Spirited “fun” at the expense of an injured donkey is pure animal abuse. There are too many other ways to raise funds, ways that show compassion for humans and animals alike. Perhaps it would be far better to partner with the local animal shelter to hold a “Senior Citizens Adoption Day” that brings pets and people together so they both can benefit. ~ Jerry

Email Charlie Riley and let him know that you are against his “donkey basketball” fundraiser. Way down on the bottom of his website is a “Contact Us” link. You can send him an email from that site.

Call Diana Trim at the Friendship Center and tell them what you think of donkey basketball.
(281) 259-6665

Call the Magnolia ISD and tell them what you think of the idea of Charlie Riley using the Magnolia Jr. High Gym for his fundraiser. 281-356-3571

Let’s put a stop to the abusive treatment of donkeys and instead teach respect and kindness
towards all animals.

I am writing to request that the “Donkey Ball” game, scheduled at Magnolia Jr. High School on
February 11, 2014 be canceled immediately.

According to published literature, “Donkeys used for this purpose may be subjected to a variety of abuses. During the heat of competition, inexperienced riders often mishandle donkeys, pushing, pulling, kicking and punching ‘uncooperative’ animals. Donkeys have been accidentally injured by falls on slippery surfaces. Unfortunately the public is not aware of the many problems that occur behind the scenes. Provided by outside companies, donkeys are often shipped nationwide, spending their lives in cramped trailers. Food and water are frequently withheld from the animals during transit or provided at irregular intervals to prevent ‘accidents’ from occurring in public places. Stress from frequent travel can weaken the animals’ immune systems, increasing their susceptibility to a common and sometimes fatal disease known as ‘shipping fever pneumonia.’…Both players and spectators may be kicked by frightened animals. Individuals involved in this activity have cracked their ribs, broken legs, arms and wrists; and sustained concussions and other injuries that have required hospitalization….”

Schools should not be setting the negative example to students that animal exploitation is something which is socially acceptable. It is shocking that Magnolia Jr. High is encouraging and allowing this flagrant exhibition of organized animal abuse to take place at all. Surely you can find better and more effective ways to raise money than by having adults jumping on and off the backs of these poor animals.

This is particularly troubling in the wake of tragic violence in the schools. Concerned citizens and parents in Monmouth County, NJ were recently able to successfully convince the Monmouth County Education Association to pass a resolution against “Donkey Ball” primarily for those very reasons. Based on numerous studies, there is now no question that there is a strong connection between violence against animals and violence in humans toward other humans.

Please cancel this cruel event and replace it with something to inspire compassion, humanity and good will amongst your citizens. I look forward to your reply.