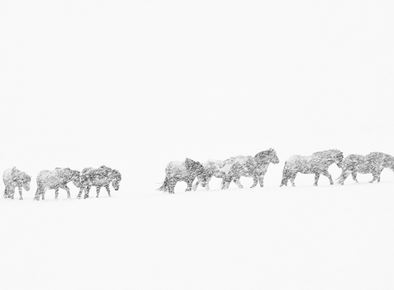 From: WorldMag.com
By: Jill Nelson

One of the worst blizzards in South Dakota history plowed through the region during the first weekend of October, leaving a wake of destruction in its path. It will be days, maybe weeks, before ranchers can locate missing livestock, but estimates are they will find tens of thousands of dead cattle. 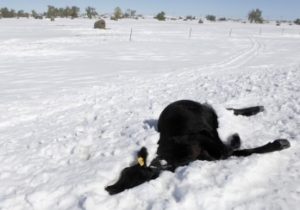 On Oct. 9, I was able to reach the Reinhold family, who live on a ranch in Meade County. They were in day six of a power outage, and phone lines had just been repaired the night before. “It just socked us,” Larry Reinhold told me in a sober tone. “It’s really, really bad. We didn’t lose as many cattle as some of our neighbors, but we lost a lot of horses. It’s a pretty big blow.”

The storm began with two inches of rain on Oct. 3, soaking livestock that had not yet grown their winter coats. Winds in the 60 to 70 mile an hour range added to the freezing temperatures as the rain converted to snow and dumped an unprecedented amount for the unusual October storm.

For ranchers, the storm amounts to a tremendous financial loss. A few days before the storm, 17-year-old Molly Reinhold spoke with a friend who planned to sell 83 calves this weekend. Only 33 made it through the storm. Many of the family’s neighbors lost 20 to 50 percent of their livestock.

Some ranchers are turning to social media sites, posting heart-wrenching pictures of dead horses and cattle and venting frustration at the lack of national media coverage. President Barack Obama has yet to acknowledge the state’s disaster. Some are asking for help finding livestock that may still be alive.

In addition to raising Quarter horses and Hereford cattle on Lonetree Ranch, the Reinhold family operates Rainbow Bible Ranch, a summer camp where kids learn to ride horses and herd cattle on the wide-open prairie of their 4,250-acre ranch. Sharing the gospel is the camp’s cornerstone.