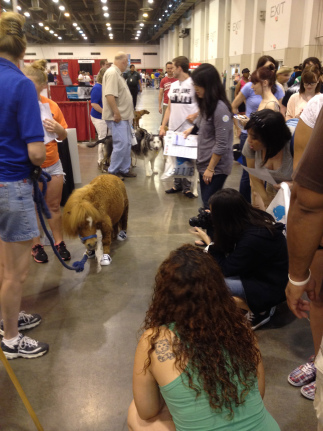 The break in the educational series, Horse Rescue 101, was caused by the demented ravings of the horse eaters as they continue to seek a sympathetic town/county/state that will welcome their sideshow carnival. From the sounds of it, New Mexico would rather host the nation’s depleted uranium storage in Carlsbad Caverns than act as the disposal site for the self-inflicted overbreeding habits of the AQHA, the APHA and the racehorse industry.

Even more impressive is that $ue Walli$ now thinks everyone in government is a Socialist or a Communist or whatever you want to call people who disagree with you. I’ll write more about that insanity in another article, but for the moment, let me break from that break to bring you another interesting feature.

Saturday several volunteers, including Pam Vise and Greg Grander, joined together to get Habitat for Horses into the Houston Pet Expo, which ended up being an all day event with literally thousands of people and a few hundred dogs wandering around Reliant Center. Naturally, we had to bring Sir Munchkin of Habitat, less formally known as “Munchie,” who ended up being the center of attention. He and his entourage only stayed for two hours, but there now has to be about a zillion pictures of him floating around

When Munchie does a tour, he wears him special sneakers from Build-A-Bear so he won’t slip on the floor. Almost everyone wants to touch him, and the questions come from everywhere.

“Is he a miniature?” He’s a dwarf mini

“What and how much does he eat?” An ounce of horse feed per day and grass

“Will he get any bigger?” No, he’s full grown

“Can I adopt him?” No, but we have other horses

Munchie was more than happy to get back in the trailer and return home to his mommy. He’s exempt from the happenings coming up this weekend.

Oops, I didn’t tell you?

Well, for those living in and around Houston, you are invited to join us at the Redfish Roadhouse, 6121 Hwy 6 in Hitchcock on Friday night for a benefit dance for Habitat for Horses, with LT and the Zydeco. Saturday from 10am through 4pm, the bike run zooms all over the place. Starting at 1pm, Paul Rodriguez plays, then at 4 the live auction begins – all benefiting Habitat for Horses.

As one of the sponsors said, “It’s our chance to pay back a little bit for all Habitat for Horses does for the community.” We appreciate it, seriously, and we are deeply thankful for the support.