Scooby walked up to someone’s house during one of the most rainy periods we’ve seen in this area. He was soaked, his hair was a mass of knots and mud, he was extremely underweight, and to top it all off, totally blind. How he made it anywhere is a mystery. Perhaps he was pushed out of a trailer, perhaps he followed another horse.

One guess is as good as another, but the miracle is that he made it to the home of some folks who cared enough to call us. We immediately picked him up.

Had he not been abandoned or lost, he would have been the subject of a seizure. That’s probably why no one ever stepped forward to claim him. I would not hesitate to ask law enforcement to file charges on the owner for animal cruelty. As I’ve said many times before – there is no excuse.

Scooby’s recovery was not an easy task. Worms were a problem, of course, and his teeth were in terrible shape. That’s common in the type of horses we see. A few visits to the doctor and equine dentist and five days of wormer did the trick on getting that part under control. It didn’t help Scooby. He kept going downhill, losing a little more weight each day. Then the diarrhea started.

Scooby was confined to the stall and started on IV’s, plus an endless amount of shots and medications. We changed the IV bags every four hours, day and night for two weeks, before we got the diarrhea under control. Then he lost his desire to eat and almost lost his desire to live.

That’s where love comes in. The people that are taking care of a horse like Scooby have to do a lot more than go through the motions of giving shots and dumping feed. They have to become emotionally involved. This was one case where some of our volunteers had to walk away because they were convinced Scooby was dying. I can understand that. The protection of distancing yourself from emotional attachment is a valid way to protect against the pain that death brings. If they need to walk away, then I respect their decision.

But it isn’t something I can do. There is magic in love, and the magic worked on Scooby. We fought off two more rounds of diarrhea before we finally saw an uphill turn. Steroids and B-12 fired up his hunger, but love gave him the desire to continue living. 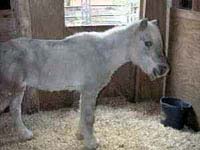 Update: Scooby after 5 months
After 5 months of feeding, medical care and love, he’s physically fit and full of a special kind of love. He adores being held, never complains when he’s brushed, and will stand still for hours if someone wants to spend the afternoon scratching and hugging a very special guy.

There are thousands of horses like Scooby who need our help. Their future is in your hands. All it takes is for you to click on the “Donate Now” button. Are you willing to help?

In Loving Memory
Scooby passed over the Rainbow Bridge late at night on November 15, 2003. He died of old age. He will be missed dearly by those who loved him, and especially by Nicole, the pony who looked after him.