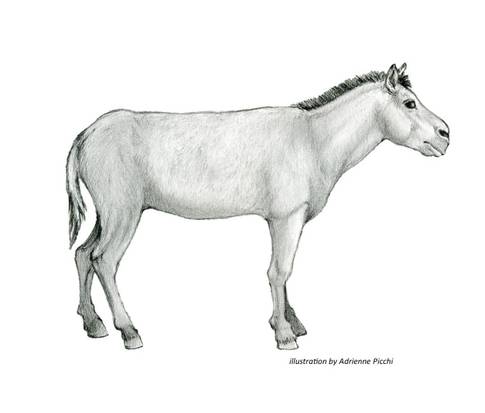 Kurt Miller/The Press-Enterprise
Eric Scott, San Bernardino County Museum curator of palentology, uses a pick to break out a possible fossil at Tule Springs in Nevada in 2010, as Kathleen Springer, the museum’s senior curator of geological sciences and lead scientist for the research program in the upper Las Vegas Wash, looks on. Fossils of Equus scotti, an Ice Age horse not found in the area before, were discovered at the site

San Bernardino County Museum scientists excavating an Ice Age mammoth skeleton from the Tule Springs area north of Las Vegas have found a skull and lower jaw of an ancient horse never before reported at the site or in Nevada.

Horses are not uncommon in the Tule Springs fossil record, but not Equus scotti, a large horse common in much of western North America during the Pleistocene Epoch, or Ice Age.

Las Vegas-area volunteers were instrumental in the discovery.

“Our research funding from the Bureau of Land Management includes a strong public outreach component,” said Kathleen Springer, the museum’s senior curator of geological sciences and lead scientist for the research program in the upper Las Vegas Wash. “Because of this, we set up Nevada’s first paleontology-based site stewardship program, getting local citizens involved in our research. And now it’s paid off — in a big way.”

Springer discovered the fossil site in 2003, during survey conducted by museum scientists and funded by the Las Vegas district office of the Bureau of Land Management. The original find — a tusk and tooth of a mammoth just peeking out at the surface — suggested that multiple parts of the skeleton might be present.

In 2012, Springer’s mammoth site was selected for excavation as part of the BLM’s celebration of 50 years of science at Tule Springs. The presence of multiple bones made it ideal for excavation by site stewards working with museum paleontologists.

Brushing through desert sediments at the surface quickly revealed fragments of horse teeth mixed in with the mammoth fossils. Careful digging teased out more horse teeth, then both sides of the lower jaw, and finally, the skull.

The new finds preserve anatomical features never before seen in any horses from Tule Springs, making firm identifications possible for the first time. The site is nearly 12,000 years old, making the fossils among the youngest records of Equus scotti anywhere in North America.

CONTINUED – Read more and COMMENT at The Press- Enterprise (Lots of interesting comments!)