A love for the horse has existed since my childhood. This was followed by the opportunity of working on a horse farm, for several years part time, during my teens and twenties. Later on in life I became absorbed in the mustangs out west. Books written by author Hope Ryden, on the subject, became the focus of my attention, at the time, along with others, which created an insatiable thirst inside to experience the wild horses for myself, in the wild. During this time period, also, I returned to school, finishing up a degree in Biology, at Indiana University, with the hopes of being able to apply my knowledge for the benefit of creatures in the wild, while I operated a business in construction and raised my children. 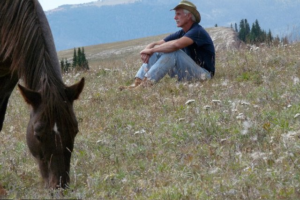 The opportunity, however, to experience the wild horses, for myself in the wild, came in Sept. of 2009, my first real encounter, while I was up in the Pryor Mts. It proved to be one of the most beautiful and spiritual experiences I have ever had. I became drawn into a marvelous peace that seemed to immerse me in itself, along with a realization of the perfect balance that existed, not to mention the obvious warmth that exhibited between members of the individual family bands.

This was followed, a few days later, by the horrors of a Bureau of Land Management roundup, where nothing but chaos persisted, family bands being broken up, and family members isolated from each other. The entire experience of this roundup brought me to tears. From this point on I starting making the wild horses and burros a focal point, studying, and writing as much as possible, while collaborating with Wildlife Ecologist, Craig Downer and others about the entire issue.

I had more opportunities documenting the wild horses and burros, with Craig, late in 2009, in what was called the Calico Mt. Complex, followed by witnessing the horrors of many more roundups by the BLM. Late in 2009, I was approached by an individual at an advisory board meeting, more specifically, an individual on the board, who tried to discount any knowledge that I might have about the wild horse issue, because I came from Indiana. I related to this individual that the basics of ecological balance are identical, where ever one may find themselves, whether it be Antarctica, Africa, South America, the United States, or more specifically Indiana. Nature knows very well, in any geographical region, how to maintain ecological balance and establish the appropriate numbers of interactive species, without mankind’s intervention. Mankind’s soul duty is to keep his hands off.

My love, focus and work to preserve the wild horses and burros, in the wild, has continued since then, doing all that I can, in conjunction with others in this fight, to preserve these beautiful creatures in the wild, whether it be documenting roundups, or writing articles, letters and reports, to aid in educating the public and governmental figures as to the true nature, and necessity of the existence of wild horses and burros, as vital components of ecological balance. In addition I do all that I can to expose the deceit behind the information, coming from the BLM, and the atrocities of the round ups. Mankind’s incessant belief that he must manage nature, and more specifically, the wild horses and burros, has continually and consistently thrown nature out of balance. Our supreme duty, as mankind, is to allow nature to maintain itself, according to its own mechanisms. This, it has been doing successfully for thousands of years, without mankind’s intervention an can continue to do so, if we allow it. The beauty of the existence of the wild horses can only be realized as they live their lives in the wild, unmanaged and untouched according to nature’s mandate. This is what they are. This is how they must remain.