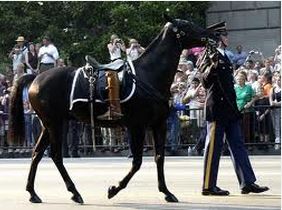 From: Star Herald
By: Joe Dutton

Two local Veterans Day parades will highlight a special caparisoned horse this year to honor all fallen members of the military.

A caparisoned horse is a single black or dark colored horse dressed in specialized ornamental coverings without a rider. A pair of black boots are in a reverse position in the stirrups, representing a fallen military leader looking back on his troops for a final time.

This tradition is believed to have originated with Genghis Khan, but there’s also evidence that it started in Greek times when an officer of significant rank would to die in battle and the horse would return to it’s home without a rider.

In U.S. history, the caparisoned horse is typically part of military honors given to an Army or Marine Corps officer who was of the rank of colonel or above, including the president. Abraham Lincoln was the first to receive this honor with the inclusion of the caparisoned horse at his funeral procession.
Honorably discharged United States Army Private First Class Shelly Mullins has had a longstanding family tradition with the caparisoned horse in Colorado, but plans to continue the tradition in the Panhandle of Nebraska.

Mullins said the procession is something not too many people know about, but wants to bring it to light since it’s very important to the military as well as important in showing respect to fallen soldiers.
“With the recent wars that have gone on and the recent loss that we’ve all endured, it’s important to give that respect,” she said.

Parades are a challenge Mullins because she has to compose herself from holding back tears and getting caught up in the moment, keeping stoic military composure throughout the entire parade.
“You see family members saluting you. You see other officers or other enlisted men and women saluting and giving that honor and respect to it,” she said.

During the caparisoned horse procession, the soldier walks at a 45-degree angle with his or her right arm holding the halter of the horse with the left arm at the side, and walking at attention in cadence. Everything on the horse is in black, with the exception of a white ribbon on the saddle blanket.