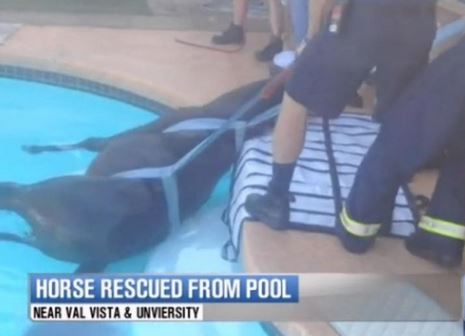 Fences and gates are needed around pools for more than just our kids…our four legged friends can wind up trapped! Thank goodness it was not cold and everything turned out alright. ~ HfH

An Arabian horse that fell into his owner’s backyard swimming pool is expected to make a full recovery.

Firefighters were called to rescue Stormy the 12-year-old stallion after he plunged into the water at a house in Mesa, Ariz., on Saturday morning.

Owner Jack Branham initially tried to pull the 850-pound horse out with the help of his grandson.

“We held him up so that he wouldn’t be fighting, and I didn’t want him going to the deep end of the pool. Then he could have drowned,” Branham told AZFamily.com.

But when their efforts failed, they decided to call in the experts.

Firefighters first sedated the struggling nag — sending it into a deep sleep so it wouldn’t panic.

Straps were then attached around the snoring horse’s body so he could be hauled out of the pool.

The sleepy steed was gently dragged along the ground to a sunny spot where he was attended to by a vet.

“He then got up and wobbled a little bit and they gave him some more shots for infection and so on,” Branham added.