Rare Caspian horses being neglected and malnourished in Maine need your help.

Habitat For Horses / breaking  / Rare Caspian horses being neglected and malnourished in Maine need your help.
12

Rare Caspian horses being neglected and malnourished in Maine need your help. 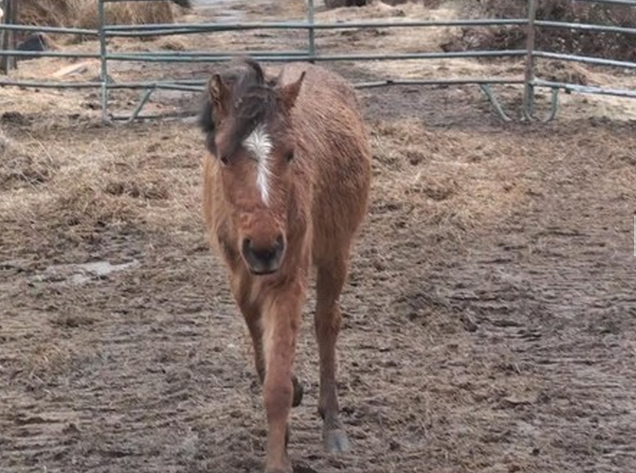 Please read and share this heart breaking story of neglect with your friends on Facebook, Twitter – all of social media! Then take a few minutes of your time to sign this online petition: https://www.change.org/p/houlton-police-department-maine-animal-welfare-agency-maine-dept-of-agriculture-stop-severe-caspian-horse-neglect and contact the Governor of Maine at 207-287-3531 / Toll-free: 1-855-721-5203. Together we can bring light to this issue of politics and power that are being used to cover years long abuse of rare Caspian horses. ~ HfH

A rural town in Maine with just over 6,000 residents is home to 50 of the world’s 1,200 endangered Caspian horses. Fewer than 600 reside within the United States, according to The Livestock Conservancy.

As early as 2009, local residents in Houlton were up-in-arms when they noticed a group of endangered animals appearing to be neglected, malnourished and abandoned. Residents claim that subsequent complaints to authorities were “never acknowledged”, as one resident described it. A former humane law enforcement agent for the State of Maine, who requests not to be identified out of fears of retaliation, estimated that eighty percent of the horses are severely malnourished. The agent said that for the past three years, they have made several complaints to local and state law enforcement agencies, but said those calls were never returned.

That was over two years ago. Since then, concerned citizens have reached out to other law enforcement agencies outside of Houlton, including the state’s Department of Agriculture, Attorney General’s Office, Department of Justice, and the state-wide Animal Welfare Agency.

No action has been taken against Jessica York, the owner of the horses. Some claim that authorities are reluctant to investigate her as York’s father, Dick York is a prominent businessman. Some of the area businesses York owns include Houlton Toyota Dealership, Houlton Ford Dealership and Houlton Body Shop. In addition, York serves on the Board of Directors for the Katahdin Trust Company and Houlton Regional Health Services Foundation. Formerly, York served as President of the Greater Houlton Chamber of Commerce and LEAD (Leaders Encouraging Aroostook Development).

To be fair, examiner.com verified that no member of the York family made financial contributions to any political candidates in the State of Maine, according to the Maine Commission on Governmental Ethics & Election Practices. However, it’s unknown if contributions were made directly to state, county or municipal agencies. Dick York declined to comment on the allegations regarding his daughter’s involvement in the horse neglect.

Chris Johansen, a deputy with the Aroostook County Sheriff’s Department, asked his commanding officer, Lieutenant Larry Goff, for permission to investigate the matter on his own time as a private citizen. Goff granted his request as long as Johansen didn’t trespass or represent himself as a sheriff’s deputy.

After conducting his private investigation, then Deputy Johansen concluded in his statement that “Most of these horses were lean with hips and ribs showing. About twenty were in a severe malnourished condition.” The report went on to state that the horses “appeared sick and several are unable to stand on their feet for very long” said Johansen, “there was a water tub that was full of ice with several inches of snow on top.”

In May 2015, Sheriff Darrell Crandell, called Deputy Johansen into his office and gave him an ultimatum: resign or be fired. Crandell also conveniently displayed a search warrant for Johansen’s home, which would be executed in the event things didn’t go smoothly. Johansen couldn’t believe what he just heard, considering he had obtained permission from his superior beforehand and was in full compliance with the conditions set forth by his lieutenant. Shortly thereafter, Johansen made the difficult decision to resign, stating in his resignation letter “If I were to back away from this issue just to keep my job, I would be bowing to the same pressure as you” continuing to say, “left with the choice of willfully disobeying an order or resigning, I will, effective today, resign from my position as an Aroostook County Deputy Sheriff.” Cindy Johansen, Chris’s wife simply described the situation as “intimidation at its finest.”

After becoming increasingly frustrated with the authority’s inaction, Cindy Johansen launched a website called maineequine.org and a Facebook page with over 2,000 supporters.

Finally, in March, state Representative, MaryAnne Kinney, replied to Johansen’s pleas for help. Kinney said in an email to Johansen that she would “follow up on this” and “I will do what I can to get help headed your way.” Although, Johansen said such help never arrived.