Pure Heart: The thrilling life and emotional death of Secretariat

Pure Heart: The thrilling life and emotional death of Secretariat 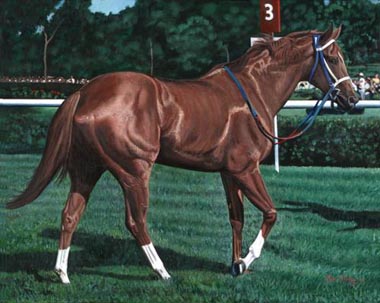 Although this story is decades old, it is on a subject matter many horse lovers are still fascinated with – Secretariat. Whether or not you follow horse racing, Secretariat was an amazing horse. His life and the stories about him have been lauded in movies, books and even song. ~ HfH

From: Sports Illustrated
By: William Nack 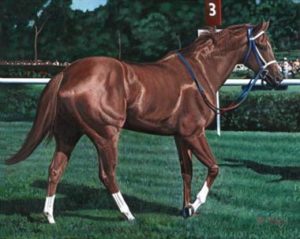 In honor of Sports Illustrated’s 60th anniversary, SI.com is republishing, in full, 60 of the best stories ever to appear in the magazine. Today’s selection is “Pure Heart,” by William Nack, which ran in the June 4, 1990 issue.

In waging the most glorious Triple Crown campaign ever, Secretariat made racing history. In the doing, he took the author on an unforgettably exhilarating ride.

Just before noon the horse was led haltingly into a van next to the stallion barn, and there a concentrated barbiturate was injected into his jugular. Forty-five seconds later there was a crash as the stallion collapsed. His body was trucked immediately to Lexington, Kentucky, where Dr. Thomas Swerczek, a professor of veterinary science at the University of Kentucky, performed the necropsy. All of the horse’s vital organs were normal in size except for the heart.

”We were all shocked,” Swerczek said. ”I’ve seen and done thousands of autopsies on horses, and nothing I’d ever seen compared to it. The heart of the average horse weighs about nine pounds. This was almost twice the average size, and a third larger than any equine heart I’d ever seen. And it wasn’t pathologically enlarged. All the chambers and the valves were normal. It was just larger. I think it told us why he was able to do what he did.”

In the late afternoon of Monday, Oct. 2, 1989, as I headed my car from the driveway of Arthur Hancock’s Stone Farm onto Winchester Road outside of Paris, Ky., I was seized by an impulse as beckoning as the wind that strums through the trees there, mingling the scents of new grass and old history.

For reasons as obscure to me then as now, I felt compelled to see Lawrence Robinson. For almost 30 years, until he suffered a stroke in March of 1983, Robinson was the head caretaker of stallions at Claiborne Farm. I had not seen him since his illness, but I knew he still lived on the farm, in a small white frame house set on a hill overlooking the lush stallion paddocks and the main stallion barn. In the first stall of that barn, in the same space that was once home to the great Bold Ruler, lived Secretariat, Bold Ruler’s greatest son.

It was through Secretariat that I had met Robinson. On the bright, cold afternoon of Nov. 12, 1973, he was one of several hundred people gathered at Blue Grass Airport in Lexington to greet the horse on his flight from New York into retirement in Kentucky. I flew with the horse that day, and as the plane banked over the field, a voice from the tower crackled over the airplane radio: ”There’s more people out here to meet Secretariat than there was to greet the governor.”

An hour later, after a van ride out the Paris Pike behind a police escort with blue lights flashing, Robinson led Secretariat onto a ramp at Claiborne and toward his sire’s old stall — out of racing and into history. For me, that final walk beneath a grove of trees, with the colt slanting like a buck through the autumn gloaming, brought to a melancholy close the richest, grandest, damnedest, most exhilarating time of my life. For eight months, first as the racing writer for Long Island, N.Y.’s Newsday and then as the designated chronicler of the horse’s career, I had a daily front-row seat to watch Secretariat. I was at the barn in the morning and the racetrack in the afternoon for what turned out to be the year’s greatest show in sports, at the heart of which lay a Triple Crown performance unmatched in the history of American racing.