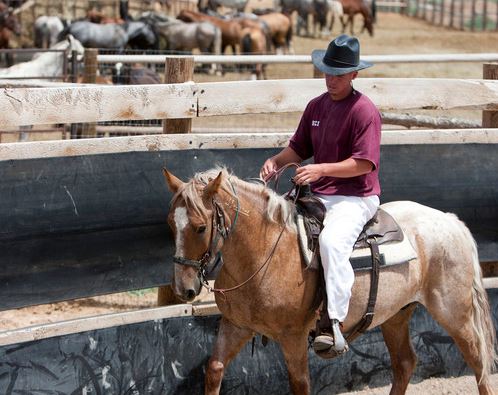 So many questions…why exactly is this program ending if the Federal Government overpaid the prison program to the tune of about 2 million dollars? ~ HfH

From: The Salt Lake Tribune
By: Marissa Lang

(Photo by Jim Urquhart | The Salt Lake Tribune) An inmate works with four-year-old horse named Duke at the Wild Horse & Burro Program at the Utah State Prison in Gunnison in July 2010. The prison is ending the program and the Bureau of Land Management must remove the horses.

The U.S. Bureau of Land Management has 30 days to move more than 1,100 wild horses out of state after the Utah Department of Corrections terminated its Wild Horse & Burro Program, ending a seven-year partnership with the federal agency.

Corrections officials said the program was burning a hole in their budget, that what was meant to be self-sustaining had become a financially unfeasible enterprise.

But BLM insisted Friday that not only had it done its part to support the program at the Gunnison prison in central Utah, but an audit last year revealed the federal government had overpaid Utah by about $2 million since the program’s introduction in April 2007.

Hanging in the balance of this disagreement are 1,126 horses and 11 to 17 inmates who care for the wild mustangs kept on a 40-acre parcel of prison land.

BLM has until Oct. 6 to remove the horses. The agency hasn’t yet determined where they’ll go — areas in Arizona, California and Nevada are being considered to house a majority of the mustangs.

About 50 will stay behind in Axtell, Utah, though the state has nearly 4,000 wild horses — more than double the number the BLM has designated as Utah’s upper limit.

Iron and Beaver county commissioners and ranchers in the Blawn Wash area whose livestock compete for forage have been pushing BLM to bring wild horse numbers down.

But the agency was reluctant to do roundups of wild horses in the West this year due to a low demand for horse adoptions. Nearly 50,000 horses are already being kept in holding pastures in the Midwest.

In late July, BLM removed 143 horses from Beaver County’s Wah Wah Mountains, and during the roundup, a yearling filly and 7-year-old mare died.

Tom Gorey, public information officer for the BLM, declined to get into specifics about where the more than 1,100 horses currently corralled at Gunnison would be going or how they would be moved.