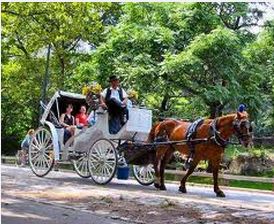 The mayor of New York City is concerned about the treatment of the horses which pull carriages in Central Park and he’s planning to ban the rides. But the operators say the horses are well looked after and they’ll fight any moves to stop the practice.

From: ABC News
By: Lisa Millar 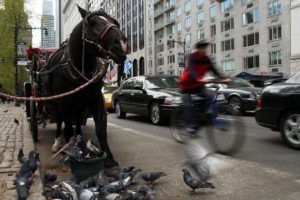 ELIZABETH JACKSON: Carriage rides in Central Park have been a popular tourist attraction for decades, but if New York’s new mayor has his way they’ll be banned.

Bill de Blasio has backed a campaign by animal rights groups which say the horses are ill treated and shouldn’t be on Manhattan’s streets.

(Sound of a horse’s hooves)

LISA MILLAR: From mid-morning, the carriage drivers start lining up near Fifth Avenue, praying for good weather and tourists with open wallets.

A horse and buggy ride sets you back about $50 for 20 minutes.

Stephen Malone used to ride alongside his father as a child, now he has his own horse, Tyson.

STEPHEN MALONE: First ride that I ever took, May 17 1987, was with Stephen King. He lives just down the street here.

And he asked, at the time it was $17, and he asked me just to do a ride and drop him at the Sherry Netherland, which is just a building down as we come out of the park and he gave me $50 for the ride.

LISA MILLAR: The horse is kept in a stable on the far west side of Manhattan. Getting to the park takes about 20 minutes, through the city streets.

Physically, these guys are pounding the pavement for nine hours a day; you can see that a lot of them have cracked hooves; they’re supposed to use pads on their feet, underneath their horse shoes, which cost $10 – the drivers are too cheap to do that.

Click Here to Continue Reading and to hear Interview