Phantom is a beautiful boy that is easy to catch and halter, and leads very easily. He picks up feet very easily and is great with a farrier and going into the stock. If that wasn’t good enough, he is calm while tied and in a stall, will easily take a fly mask, spray, and winter blankets, and loads/unloads from a trailer like a pro. Read his story below:

The call came in early, as they often do. A few counties over an underweight horse needed to be brought in. You would think it gets easier with time. That you get used to going in and seeing some of the worst abuse cases against these majestic creatures. It does not. 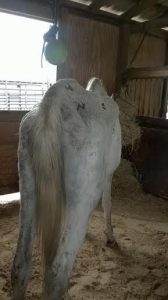 He was standing there, his breath could be seen in the cold, frightened but quiet. Ghost-like really in the early morning light. How could he still be standing?

A gentle approach allowed our investigator to give her his first look over. A fallen fetlock, about 16 or 17 years old and severely underweight – a Henneke Score of just 1. Any less and he would be passed on over the Rainbow Bridge.

How could anyone let this happen? That did not matter at the moment. What did matter was getting this boy to food, water and much needed medical care.
Our investigator had to give him a name – there was only one fitting- Phantom.
This gaunt flea-bitten gray gelding did indeed look ghost-like.

He did not struggle. Horses in these situations often seem to know when they are being helped. He loaded easily and was rushed to Habitat for Horses’ Medical Barn. This specially created building is the place where high-risk horses go for immediate and long-term medical care. There is an Anderson Sling in case they can no longer stand. There is medicine there. Of course, warmth and shelter. Even a surgical room specially designed for equine of all sizes. 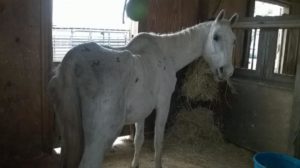 Now in the care of the ranch staff with a vet on the way, Phantom quickly discovered the hay in the corner of his stall. If one could describe a horse’s face as joyful – that would be Phantom’s face at this moment.

He was home. Not his permanent forever home, but a safe place, a sanctuary from the months of neglect. He would be well cared for, both physically and psychologically as the dedicated staff of Habitat for Horses would begin working with him right away.

In the weeks to come, medicine and proper food will be there – strengthen him, getting him ready. Then, hopefully sooner than later, someone or a family will come – his body and spirit healed. A new forever home with people who will dote over him, give him the love and care every horse deserves and desires.

Lives that were once filled with hunger and need are filled with food, care and love. It is due to your generosity. Phantom will now live with hope – and you are the reason for that hope.

Call us to find out more!

Not the horse for you? 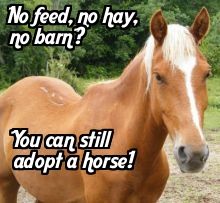