(Note – Personally, I’ve always had a strong distaste for PETA. Between ads with naked women, promoting the “slippery-slope” fear in ranchers and the scandal of euthanizing pets drawn from shelters, they have become the joke among equine advocates. Then came the insanity of promoting horse slaughter in saying, “Better here than there.” In this article, they are once again lubricating the pro-slaughter machine. This “interview” is packed with untruths, to wit:

“The doors were shut and the horses never got out, from the time they were in that truck until 36 hours later when they were unloaded into the slaughterhouse.”  – They must be let out at the border crossing, reloaded and trucked from the inspection stations. If they actually did see this, did they call someone? Why not?

““We actually shut down a horse slaughterhouse in Texas….” – LIE. I was there. PETA wasn’t. PETA had absolutely nothing to do with the closure of Dallas Crown or Beltex. Don’t wave your flag if you weren’t in the parade!

“The horse meat in beef or other food products can only be discovered by DNA test,….” – Wrong again. Very inexpensive testing methods have been developed.

Promoting the opening of US slaughterhouses for ANY reason is absurd. PETA is supposedly against animal cruelty, so why they promote horse slaughter in the US is beyond imagination. Obviously Kathy Guillermo has never witnessed horse slaughter. “Marginally more humane” never happened in any slaughterhouse, no matter where they are located.  Horse slaughter needs to end – period. Nothing else is acceptable. – Jerry Finch) 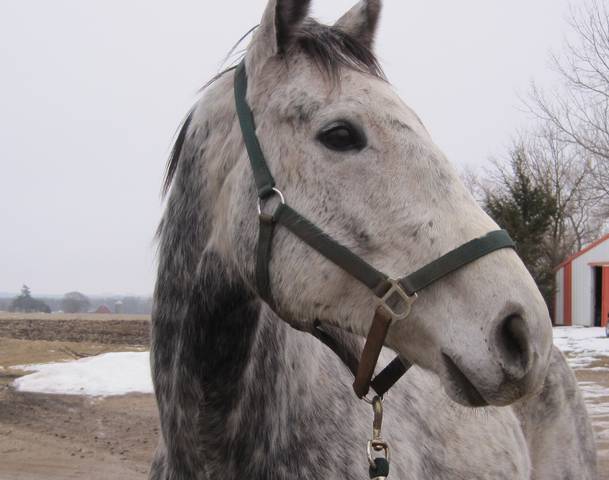 People for the Ethical Treatment of Animals opposes horse butchering. And while the group believes it is marginally more humane for the practice to occur in the US than it is to send animals abroad to be killed, PETA is advocating for bans on both the slaughter of horses and on their export for human consumption, the group’s senior vice president said in an exclusive interview with Allvoices.

“We don’t support opening the slaughterhouses in the US, but we do believe if the horses are going to be killed it would be better if they didn’t have to be trucked for two or three days before that happens,” PETA’s Kathy Guillermo explained. “What we support is the combination of a ban on slaughterhouses and a ban on export. We really need both things.”

The question of horse slaughter was once more brought to light in February, when Oklahoma’s Senate and House chambers embraced two bills that would end its horse slaughter ban for commercial purposes while prohibiting the sale of horse meat for human consumption in the state’s market.

Not long ago, in late 2011, an effective ban on the production of horse meat for human consumption lapsed and there were announcements that horses could be butchered for meat again, ending the four-year ban. At that time, many were surprised to hear PETA’s stance, as media reports had the organization arguing against the ban.

Guillermo explained that PETA’s statements have been misinterpreted. “We simply said it’s not enough; export must also be banned.”

“PETA is opposed to horse slaughter anywhere in the world,” Guillermo said. “Our concern has always been that if slaughtering is going to be banned here in the US, then we also need to ban the export of horses for slaughter, so we are not going to ship them elsewhere to meet the same fate. I should also add that PETA opposes the slaughter of all animals for food and we advocate a vegan diet.”

Nevertheless, Guillermo pointed out that if horses are going to be slaughtered, they should not be shipped hundreds of miles to Canada or Mexico only to face terrifying death.

Slaughterhouses were present in the US until 2007, when the federal government and local municipalities came down on the practice and made it all but impossible for them to continue operations. After the slaughterhouses closed, the US went on exporting horses.

“More than 100,000 horses have been exported to Mexico and Canada every year,” Guillermo told Allvoices. “Last year more than 130,000 horses were exported for slaughter. In the US, when people no longer want their horses, whether they are race horses or riding horses or show horses or whatever, they are taken to an auction and they are sold. About half of the horses sold at these various auctions across the country end up on trucks and they are slaughtered for meat.”

Guillermo further explained that horses are transported in tractor trailers and hauled for as long as 36 hours. PETA documented one case, videotaping horses that were loaded up into the back of the truck and taken to slaughter.

“The doors were shut and the horses never got out, from the time they were in that truck until 36 hours later when they were unloaded into the slaughterhouse. This means they never get off to drink water, they are never fed, and if one falls and get ill in the truck, nothing is done. No one ever opens the door to take care of the animals. So it is terrible thing that happen to the horses.”

In addition, Guillermo said slaughterhouses have an adverse effect on communities: “We actually shut down a horse slaughterhouse in Texas many years ago because we documented such cruel treatment of the animals. In terms of what happened to the community, there was run-off flood and fluids that went into the public water stream, there was a terrible odor and people who lived in that community all agreed that it was worse to have it there than not. They were all in favor of closing it down, even though that slaughterhouse provided some jobs.”

In the last few months, Europe has been shaken by scandals following the revelation that the beef sold in some of its largest supermarkets actually contained horse meat. Many raised questions about whether American consumers could, sooner or later, be faced with the same discovery.

Guillermo said it is difficult to answer whether horse meat is being served on American plates.

“Animal flesh is regularly being tested to ensure there is no salmonella or other pathogens in the food supply,” she said. “The horse meat in beef or other food products can only be discovered by DNA test, which makes it impossible to say whether meat sold in US supermarkets contains horse flesh or not.”