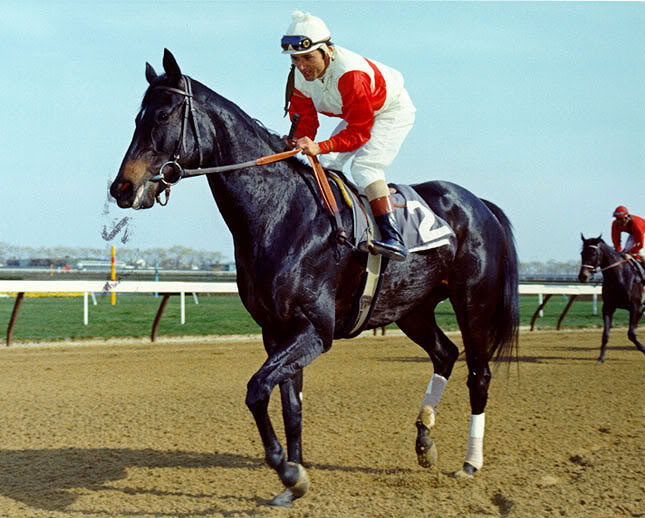 (Part one was published on our website yesterday, you can read it by clicking here. ~ HfH )

New York state equine medical officials have opened an investigation into the recent rash of deaths at Saratoga, but all they really need to do is ask any true horseman what is causing them. These horses are being run while they’re still babies, before they’re mature and their bones are fully developed. What the hell do they expect?And this outrageous and inhumane activity has been going for the past 40 years or so since the moneymen took the sport away from the real horsemen and women. The average retirement age of Thoroughbred race horses today is four, the age when they should be starting their careers not ending them.
I’m not going to go into great detail here about the scientific and medical facts supporting this statement. My colleague and friend Vivian Grant Farrell, founder of The Equine Fund, has already done that in her superb blogTuesday’s Horse. I refer you to her ongoing series of articles on this topic for more details, but just let me say that politicians don’t have a monopoly on spinning the facts to fit their point of view. If possible, the racing industry and its slave equine veterinarians have even less regard for the truth than they do for the horses who support their lifestyles.

The one lie that those of us who have dedicated our lives to rescuing at-risk horses would laugh at if it wasn’t so sad is that Thoroughbreds mature faster than other horses. A horse is a horse, and as a species they all develop at about the same rate. No matter what the breed, they are not fully mature until about six years of age. They should be at least three before they are even ridden and put into serious training. Thoroughbreds might still be walking when they leave the track, but most of those who survive equine slaughter, the dumping ground for a disproportionate number and whole other topic, are either suffering from arthritis or other spinal, bone and joint problems when we get them later in life. This is the case with far more than any other breed I’ve ever rescued.

It wasn’t always this way. In a future article I’m going to tell you about one of the great ladies of Thoroughbred racing decades ago so you can compare her approach to her horses and racing to those today. One of the saddest things I’ve ever witnessed is when I stayed up late one night a few years back to watch a Congressional Hearing on C-Span in which a group of old time breeders and trainers, some of whom had once been famous, testified about the problems facing Thoroughbred racing today. As I recall, the youngest member of this group was 78, and their message to the elected officials on the subcommittee was simple. Thoroughbred racing is no longer controlled by horsemen, but by the corporate interests that run the race tracks and the gambling industry. They said over and over that the interests of the horses have been sacrificed to the bottom line of profit. They begged for Congressional oversight of racing. And as you would expect in today’s political environment, their pleas fell on deaf ears. Not only was I never able to find any coverage of that hearing in either the general or racing media, but of course nothing ever came of it either. As always it seems in our nation’s capital, money trumps justice every time. Guess where the lobbying dollars are coming from on the issues confronting Thoroughbred racing? And, by the way, it’s not any different than Quarter Horse racing or any other equine competitive activity where the almighty dollar is king.

There are two major things destroying horse racing today, the motive of quick return on investment that pushes horses onto the track long before their bodies are developed enough to handle this work and, of course, drug abuse.

Here’s what longtime equine racing veterinarian Dr. Percy Sykes had to say about the former in one of Vivian’s recent articles; “In the old days, you bought your yearlings, you broke them, you castrated them and then you turned them out. You didn’t think about them until the late two year olds and mostly three year olds. The big money was in three-year-old racing. The current owners want two-year-old racing and I think it’s a pity. I think it’s a pity because it certainly does cause the breakdowns of a lot of two-year-olds.”

Add this the fact that the Jockey Club considers January 1st of a horse’s birth year as its birthdate, and you actually have horses racing today that aren’t even two year olds. The simple fact is that at this age horses should be out gallivanting in a pasture as the youngsters they are while they mature, not subjected to the stress and trauma of the training and being raced they actually endure. Quick return on investment is clearly the only thing most owners today care about, not the horses themselves.

As to the drug issue, here is what Dr. Gregory Ferraro, director of the Center for Equine Health at the University of California, Davis, wrote in the North American Review back in 1992; “In general, treatments designed to repair a horse’s injuries and to alleviate its suffering are now used to get the animal out onto the track to compete—to force the animal, like a punch drunk fighter, to make it just one more round. Equine veterinary medicine has been misdirected from the art of healing to the craft of portfolio management, and the business of horse racing is in the process of killing the goose with the golden eggs.”

As I mentioned in the beginning, I am not a fan of Thoroughbred racing. Horse racing was not a factor when I grew up in Eastern Carolina back in the fifties and sixties where stock car racing was king, and it wasn’t until that ill-fated day in 1975 when Ruffian went down that I paid much attention to the sport. I haven’t watched a Thoroughbred race since that day, by the way, because it was one too many to last a lifetime for me. I am a huge fan of Thoroughbred horses, however. Although I am not a pure OTTB rescuer like my close friends and colleagues Katie Merwick here in Washington, and Grace Belcuore and Pam Berg down in California, I have been privileged to welcome a total of 26 of these great horses into our resident sanctuary herd over the years. Most have been animal control seizures here in our area, whose physical problems brought about by being raced too young made them unadoptable as they reached their later years and put them at risk.

So what would Thoroughbred horses have to say about the racing industry today? Don’t forget that a recent study revealed that a full 85% of them will suffer at last one serious injury or illness during their track careers, which, along with the fact that they carry over 1,000 pounds on ankles roughly the size of a human’s, will influence their opinions.

“Stop pounding us into the ground when we’re still children just so you can avoid the cost of feeding and caring for us for one more year until we’re physically mature enough to race. After all, you wouldn’t let your son’s Little League coach force him to learn and throw a curve ball just to win games when you know full well he will pay a terrible price in his elbow joint later in life. We feel pain just like you do. Either clean up your so-called sport or stop calling it that and describe it for what it really is, a meat grinder for horses.”