Over 100 feared horses dead in OK

Over 100 feared horses dead in OK 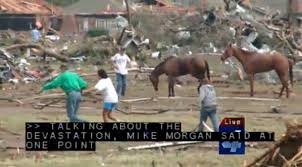 More than 100 horses are thought to have perished in the massive tornado that hit the Moore, Okla. area May 20 in addition to the human lives that were lost.

“Right now we still don’t have any specific numbers [on how many horses have died],” said Tony Vann, president of Vann & Associates, the public relations firm that represents the Oklahoma City area farm.

Vann said it was difficult to determine the number of animals lost since Orr rents stalls out to multiple trainers and it was unclear exactly how many were stabled at the farm at the time of the tornado.

The farm’s stalls and barns took a direct hit from the tornado, which was estimated to be on the ground for 40 minutes as it demolished everything in its path. It was estimated to be 3.2 kilometres wide. Three and a half of the facility’s five barns were reported to be swept away.

Vann said debris had been found on the Orr property from the city of Moore all the way to Tulsa, Okla., which is approximately 90 miles from the farm. “Right now they are going through and looking at just what they lost,” he said.

On its Facebook page, the farm noted that while it sustained an “extreme amount” of damage to its property and adjoining facility, its staff is unharmed from the tornado.

Vann said there were five staff in the farm’s administration office, plus several seasonal workers on site when the tornado approached. All were able to reach safety before it struck.

An exercise rider named Lando Hite who survived the tornado by huddling in a Celestial Acres horse stall was interviewed on CNN May 20. He predicted only one horse out of 80 that resided on the property had survived the disaster.

“I tried to let some of the horses get loose and free out of their stalls so they’d have a chance,” said Hite, who suspected the tornado was on its way moments just before it touched down.

(NOTE – at the bottom of the page is a link for donations. Use caution and understand that you are donating to a FOR PROFIT breeding/racing facility. I always recommend that you only donate to an equine rescue organization in the area that is verified by the Global Federation of Animal Sanctuaries. One such non-profit is HorseFeathers Equine Rescue. For information, please go to THIS FACEBOOK page for Now or Never Horse Helpers. Below is a post requesting assistance – Jerry)

“OK if anyone would like to donate financially here is one way to do it~~~~~One of the current PayPal addresses from a verified source is Cheri White Owl-Nguyen of HorseFeathers Equine Rescue, located in Guthrie. She started the Oklahoma Hay Bank, and is a GFAS accredited rescue who does WONDERFUL work. She states this: Cheri White Owl-Nguyen ” I’m not sure who the others are but ours is plainswindrdr@gmail.com. We are accepting for the hay bank and they can also call Cross Brands and put on account there 405-478-2327 and we can get things delivered to areas needed.”