One man dead after collision with horse transport

One man dead after collision with horse transport 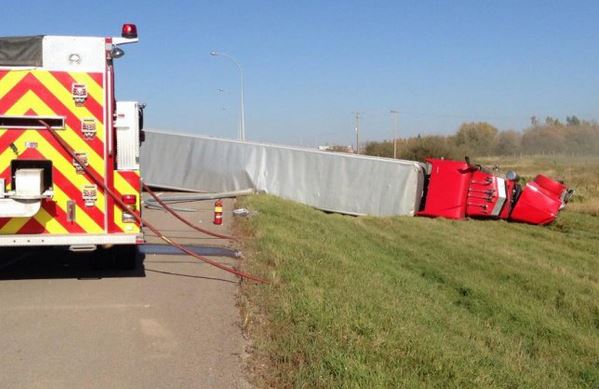 The number of horses slaughtered in Canada is something we choose not to think about here in the United States. It is only when tragedy strikes in a public place that the ugly business of Canadian horse slaughter is seen. In this case a horse transport tractor trailer is overturned. 15 of the 27 horses survived…well long enough to meet their end in an abattoir. ~ HfH

RCMP are currently on the scene of a serious two vehicle collision that claimed the life of one man just east of Regina.

REGINA – RCMP were called Thursday afternoon to a serious two vehicle collision that claimed the life of one man just east of Regina.

Police responding at Highway 1 near the Balgonie entrance found a tractor trailer carrying horses and a SUV collided.

The SUV attempted to cross the highway from the town of Balgonie and was hit by the semi in the eastbound lanes.

The 85 year-old SUV driver from Hubbard, Sask. died in the crash. The driver of the semi was uninjured.

The semi-trailer had 27 slaughter horses in it, and since the trailer was overturned it was a long process to remove the animals and assess the scene inside.

Several livestock experts, including local veterinarians, were on hand to assist with the horses.

Of the 27 horses in the trailer, 15 survived. 3 out of the 12 horses that died were put down by RCMP on the advice of vets on scene.

Later that night after the horses were removed and emergency crews were about to move the semi off the road, it caught on fire and the Balgonie Fire department returned to extinguish the blaze.

The collision remains under investigation by police.