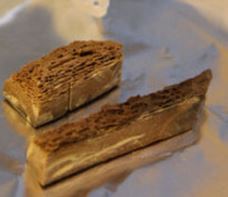 It is amazing what biologists are able to do. Under perfect conditions, DNA can remain intact for no more than 6.8 million years. The permafrost where the animal was found is pretty much ideal for keeping the tissue intact. Now we know that the genus Equus was around much longer…twice as long…as we thought before. Imagine what those herds must have been like… ~ HfH
[jpshare]
From: American Live Wire
By: Sarah Rasheed

The oldest DNA ever decoded by scientists was done on a 700,000-year-old horse in Yukon.

The permafrost of one of the oldest horses found allowed scientists to extract DNA and decode the relic information. The remains of the horse, being over half a million years old, was discovered in 2003 in Canada’s Yukon territory.

Using new methods to extract and decode the DNA, scientists and researchers were able to decipher the ancient horse’s genetic code. While researchers are still analyzing their findings, they discovered the genus Equus, found in horses donkeys and zebras, dates back to over 4 million-years-ago.

Amazed by the findings, coordinator of the research and professor at the University of Copenhagen Dr. Ludovic Orlando told reporters,

“When we started the project, everyone – including us, to be honest – thought it was impossible. And it was to some extent, with the methods available by then. So it’s clearly methodological advances that made this possible.”

Before the 700,000-year-old horse became the oldest DNA every decoded, the oldest genome sequenced was merely 120,000-years-old.

Due to the fact that the animal was frozen in permafrost when it was discovered, its DNA was preserved. The team targeted specific protein in order to target the best areas to find substantial DNA. Dr. Orlando also explains how his team used a new method of decoding genomes known as Single Molecular Sequencing:

“Single Molecular Sequencing reads through molecules as they stand, without further manipulation.”

Using their new method of DNA decoding, researchers compared the results to that of modern horses and found that the Equus genus are twice as old as previously understood. Moreover, their findings show the genetic variations over time with the cooling and warming of Earth’s climate.

While the Single Molecular Sequencing has only been used on animals thus far, the next step will be to use the revolutionary technique on human ancestors.