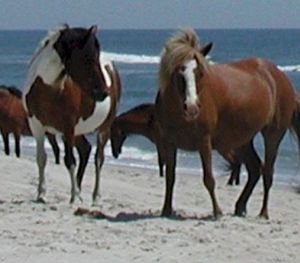 Below are a couple of news articles on the wild horse contraceptive debate. The research on the effects of PZP on wild horses is often over looked by officials promoting its use. As pointed out in the comments in one of the articles, consecutive PZP use results in mares foaling later in the season when they are allowed to give birth. This can be disastrous in areas such as Montana and Wyoming. For Jay Kirkpatrick, promoter of PZP and director the Science and Conservation Center to say “PZP is so safe its boring” is either an outright lie or a man who does not know the complex facts. The use of contraceptives is still considered to be a much better, safer method of dealing with wild horse population management when compared to “culling” such as the US used to do on a regular basis and Australia has done in more recent years. How do you feel about the use of contraceptives on wild horses? ~ HfH 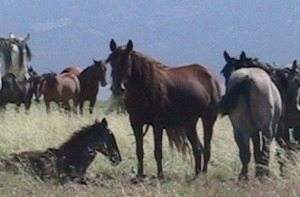 With an audible boost from of a pair of bullhorns, members from Connecticut to California made comments, demanded a meeting with Jim Sparks, manager of the Billings field office, and then delivered a certificate of sorts — the “Worst Federal Agency Award” asserting that the agency has “assaulted and violated wild horses in the Pryor Mountain Range.”

Prior Mountain is just north of the Wyoming border near the Bighorn Canyon National Recreation Area.

After the group departed the office and had gathered outside, about eight Billings police squad cars arrived, and Lt. Mark Cady — alerted by police from Federal Protective Services — spoke to the group’s president, Priscilla Feral.

Cady said he told Feral that the group has the right to protest and that police were there to keep them safe. He said Billings police were on hand “on a law-enforcement assist.”

The relatively large response was based on a report that there were up to 30 protesters present, Cady said.

Wild horses on the Assateague Island National Seashore are living longer, with less impact on their natural surroundings, thanks to birth control.

The horses on Assateague Island, off the coast of Maryland, have been managed by the National Park Service for more than 20 years using the PZP fertility control vaccine. According to a story published by the Daily Times of Salisbury, Md., management of the horses with PZP has helped reduce negative impacts on the park’s natural habitat and other native species.

Fertility control also is helping horses to live longer. In 1990, hardly any horses lived past 15. Now, the horses are living to 30 and older.

According to Assateague Science Communicator Kelly Taylor, females in the herd receive the vaccine starting when they’re two, but then go off of it when they’re four until they deliver a live foal. It’s the equivalent of preventing a scenario similar to a teen pregnancy, where the horse’s body isn’t fully developed and ready to give birth.