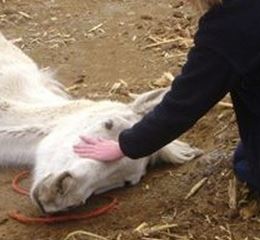 Sound laws and a fair justice system is what makes a society civilized. States where there are fewer laws protecting animals will only serve those who wish to do cruelty and abuse. ~ HfH 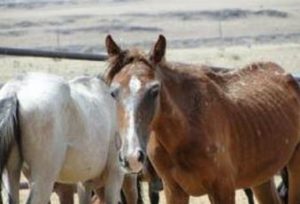 AP FileThis undated photo provided by Animals’ Angels shows severely malnourished horses in Valencia County at the Dennis Chavez feedlot in Los Lunas, N.M. As horse rescue operations struggle to keep up with a growing number of neglected, abused and starving animals, some are advocating humane horse slaughter as a way to control an exploding equine population.

ALBUQUERQUE, N.M. — New Mexico once again tops an undesirable list. The latest: being named one of the best five states to be an animal abuser.

The rankings are made in a report by the national nonprofit Animal Legal Defense Fund, which does an annual analysis of animal protection laws.

According to the report, New Mexico, Iowa, South Dakota, Wyoming, and Kentucky are among the states where animal abusers get off easy.