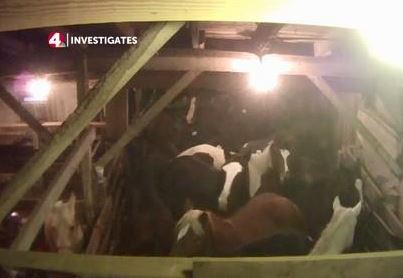 After bringing thousands of dollars or more of profit to their owners, these horses are bound for slaughter houses. A mere commodity sold for a pittance when no longer making big money. Here at Habitat for Horses, we believe that ALL horses should be provided with loving homes – even if they are no longer productive. ~ HfH

From: NBC4 Investigates
By: Denise Yost

Bound for the slaughter house.

CENTRAL OHIO – It’s not illegal to slaughter horses in America, but since 2007, when the last U.S. horse slaughterhouse closed, hundreds of thousands of horses have been sent to slaughterhouses in Canada and Mexico, where some of that meat ends up on dinner tables in Europe and Asia.

NBC4 investigates the central role Ohio is playing in supplying the international demand for horse meat.

Horses are American icons, symbols of grace and freedom woven into the fabric of Central Ohio.

NBC4’s Duane Pohlman went undercover at a livestock auction in Ohio to discover the very dark side to the horse trade, where even thoroughbreds are sent to slaughter.

Kevin Silverlaspia is a thoroughbred horse from the most royal of racing blood. He is a direct descendant of the last two Triple Crown winners, Seattle Slew and Secretariat.

On March 27, he claimed his place in the world of champions, running to victory at Penn National. Then, he disappeared from the tracks.

Seven months after his last win, and after several ownership changes, NBC4 found Kevin Silverlaspia alone and very thin in an Ohio stable.

NBC4 confirmed it with something all thoroughbreds have – a tattoo under their lips. His was worn, so with the help of animal rights experts, NBC4 checked it against more than 400 possible combinations to discover the mark: M09194. Only one thoroughbred has that tattoo: Kevin Silverlaspia.

After winning nearly $77,000 on the track, the champion horse was alone and broken. Waiting for what would be his final journey from track to table.

Sugarcreek Livestock Auction is in the heart of Ohio Amish Country.

NBC4 went undercover to find Kevin Silverlaspia, one of hundreds of horses – from work horses to quarter horses, standard breeds, and thoroughbreds.

The horses were hauled to the auction house on Oct. 10 where they were sold to the highest bidder.

It is, for the most part, a meat market for horses.