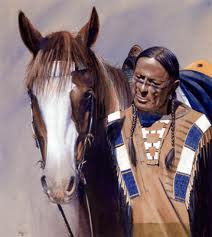 ALBUQUERQUE—A lawsuit that challenges the revival of horse slaughter in the United States illustrates the divisiveness of the practice even among the people who have considered the animals sacred for centuries: Native Americans.

The Chief of the Minikoju Band of the Cheyenne River Tribe Lakota Indians—Chief David Bald Eagle—is among the plaintiffs who are seeking to enjoin the U.S. Department of Agriculture (USDA) from authorizing the resumption of horse slaughter for human consumption after a years-long hiatus.

USDA officials have been accused of violating the National Environmental Policy Act (NEPA) by neglecting to prepare an environmental impact statement or environmental assessment before granting inspection to horse slaughter plants and implementing a residue testing program for the animals.

Horse slaughter is considered vile by at least some animal-rights organizations and Americans, including natives with roots that long predate the U.S. government in charge of overseeing the practice.

“The Lakota and Chief David Bald Eagle believe that abusing a horse, including slaughtering a horse for human consumption, will bring misfortune or death to the abuser,” according to the 40-page lawsuit that was filed in New Mexico federal court. “The Lakota and Chief David Bald Eagle also believe that allowing the slaughter of horses on Native American land will not benefit the tribal nations, but instead will be an opportunity for more control by the non-native government and outside special interests.”

Sandy Schaefer, a member of the Sioux tribe, is another plaintiff  in the case. She resides in Roswell, N.M., where Valley Meat Company LLC plans to slaughter horses after USDA’s Food Safety and Inspection Service last month issued a “Grant of Inspection” to the business.

According to the lawsuit, Schaefer considers horse slaughter “greedy, disrespectful and contrary to the Native Americans’ relationship with its brother nation, the horse nation.”

But individuals who support horse slaughter maintain that many horses are unwanted in America, including on Indian reservations, and that an overpopulation causes damage to the lands.

James Stephenson, who is employed as a big game biologist by the Confederated Tribes and Bands of the Yakama Nation in Washington, cites an overpopulation of wild/feral horses on the 1.3 million acres of land his employer manages and owns.

The Yakama Nation projects the current horse population is 12,000 and it is expected to double every four years because the Yakama Nation has no way to control the population, he stated in a declaration filed with the federal court in the New Mexico lawsuit.

Stephenson said he has seen horses who have been abandoned and “appeared on the verge of starvation.”

“The increased number of horses on the reservation is causing compaction on the soil and is destroying traditional food and medicinal plants, such as camas, bitterroot, Indian celery, wild onions and many other plants of significance to the tribal members by trampling and overgrazing,” he stated.

Concluded Stephenson: “I believe it is critical to allow horse slaughter again in the United States because without it, the Yakama Nation is suffering massive economic and environmental damage.”

In 2007, Congress ended horse slaughter for human consumption. Four years later, lawmakers appropriated funding for inspection of horse slaughter facilities. At least six applications have been submitted to USDA to resume this activity.

The Obama Administration has asked Congress to reinstate the ban. Although lawmakers haven’t done so, the appropriations committees in the House and Senate have voted to eliminate funds for inspection of horse slaughter facilities.

Last month, a committee of the 69-year-old National Congress of American Indians adopted a resolution, which supported the resumption of horse slaughter facilities and opposed legislation that is aimed to ban such activity.

The resolution states, in part: “Whereas, the Economic Development/Natural Resources committee agrees that the horse market represents the only economically viable means of reducing the size of feral herds damaging reservation environments and would further assist reservation horse producers who need to sustain their livestock operations, in the productive utilization of tribal and allotted lands”.

CONTINUED – Read the rest of the article HERE

We’re here because you want us to be here. We are your hands when we guide a horse to safety. We are your tears when a horse takes its final breath. We are your smiles when a once skinny, broken spirited horse recovers and becomes adopted by a forever family.

We represent your heart, your love and your compassion for those horses that pass through our gate and into our hands.

Support us. Without your financial help, we couldn’t do this. Without the grain, the hay, the farrier, without the fuel, the medicines, the vets, the horses that come through our gates would have no future. I know money is tight, but the horses need us, and we need you.