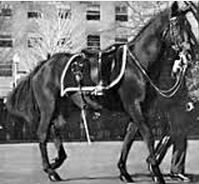 From: Miami Herald
By: Jeremy Gray

MOBILE, Ala. — Pfc. Arthur Carlson spent the night before in a stable caring for Black Jack, so he used his day off to stop by the laundromat.

Walking out that November day, Carlson, then 19-years-old, saw a group of people gathered around a car and heard the news over the radio: President John F. Kennedy had been assassinated in Dallas.

“My day off was over and I reported for duty,” Carlson said.

The Robertsdale native was one of The Old Guard, the elite unit of soldiers who keep eternal vigil over the Tomb of the Unknowns at Arlington National Cemetery as part of their service with the 3rd U.S. Infantry Regiment – the oldest active Infantry Regiment in the U.S. Army with roots tracing back to 1794.

Carlson had been with the unit for about six months and had no idea he would soon be guiding Black Jack – a 16-year-old quarter horse named in honor of General John J. “Black Jack” Pershing – as the riderless horse walked through the streets of Washington while the world watched Kennedy laid to rest.

Carlson also had no idea the kind of fight Black Jack was going to give him.

“He’d always been a calm horse. He knew his job and he did it. No problem,” Carlson said.

The Sunday after the assassination, the day Lee Harvey Oswald was shot, they followed the coffin to where Kennedy would lie in state. A metal gate resting against the wall of a tunnel they passed through came crashing to the ground.

“It made a hellacious noise,” Carlson said. “Black Jack got spooked, he stayed wild for two days and then he was back to normal.”

The next day, as they followed the caisson with Kennedy’s coffin to Arlington, Carlson had to keep control of a terrified horse. Prior to the military, Carlson said his only experience with horses was seeing them in the movies.

“I knew it was important and I had better do it right,” Carlson said in a telephone interview from his home in Mobile.

“I knew if this horse gets away from me I’m going to be walking guard duty around a radar station in Greenland before the week is out.”

Carlson, however, did keep control, even when Black Jack stepped on his foot outside St. Matthew’s Cathedral.

“At first, I thought he broke a couple of toes on my right foot, but he didn’t,” Carlson said. His shoe, however, was ruined.

In the extensive news coverage of that day’s events, Black Jack’s antics did not go unnoticed.

“The black, riderless horse that symbolized the lost leader in the funeral procession of President Kennedy today seemed spirited and difficult to handle,” The New York Times reported.

Of the many tributes that day, the report continued, “Perhaps the most poignant touch of all was the sight of the huge steed, not quite black, more of a dark chestnut, spiritedly trailing the horse-drawn caisson and its coffin of the deceased president.”