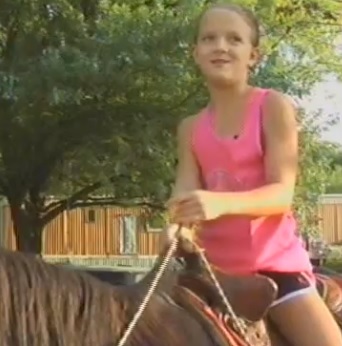 ATLANTA, MO. — A lot of kids ride the bus to school.

Others have parents who drop them off at the front door, but a northeast Missouri girl has a four-legged mode of transportation she rides to class.

When it comes to unique ways to get to school, Makaila Teter, 9, of Atlanta, Missouri, gets an “A.”

She gets to class by saddling up.

Riding a horse to school was the brainstorm of Makaila’s mom, Cindy Teter.

Cindy gets their horse, named Project, ready for the three- or

four-block ride while her daughter is showering and getting ready for school. 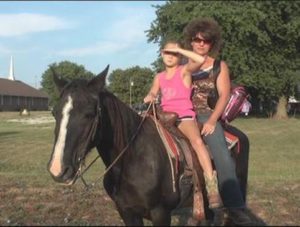 “Makaila’s not one who likes to get up and go to school in the morning,” said Cindy. “She’d just as soon lay in bed. So, I woke her up one morning, and I’m like, ‘How about we ride the horse to school today?’ She’s like, ‘YES!’ She’s never popped up out of bed so fast.”

Makaila has been interested in horses since she was a little girl. Back then, she had an imaginary horse.

“It was black, and I named it Black because I watched these TV shows, and there was this black horse, and it’s name was Black,” said Makaila. “We had a trunk, a huge trunk, and I would always pretend it was my imaginary black horse.”

This third grader doesn’t have to pretend any longer. Now she has the real deal.

The horseback ride to school only takes about 10 minutes.

This mother and daughter have have been trotting there nearly every day since the new school year started.