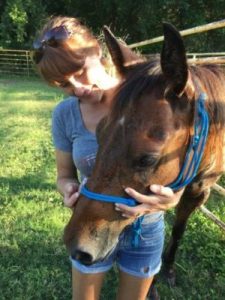 “Missing Presumed Stolen” – that’s what went down on the initial police report Sunday morning after we found the fence cut at our 50-acre grazing pasture. The initial count by the feeding crew kept coming up one short, and a complete search around the property showed no signs of Reynolds, a six-year-old bay gelding. That was our first thought; maybe he was trapped in the brush, maybe he stepped in a hole and needed help. Once the cut fence was discovered, our greatest fear became reality – one of our horses had been stolen.

The police took the initial report, but knowing there was little they could do other than releasing a BOLO (be on the lookout for), we contacted NetPosse.com, also known as Stolen Horse International. Within hours, the pictures and description of Reynolds were on Facebook and a handful of other social media. Through the efforts of NetPosse and others, three Houston TV stations sent their crews, along with the Galveston Daily News. By nightfall, the news had been spread and the reports slowly started coming in.

“We saw a teenager walking a horse down the road.”

“He had long hair and wore a red shirt.”

“He turned down that corner, that’s the last I saw of him.”

After twenty years of keeping rescued horses in this neighborhood, this was the first time anyone had taken one from us. Because of our work with law enforcement, folks know what these horses have gone through. Almost all of them, including Reynolds, came from horrible situations involving starvation and extreme physical abuse. It takes years for some of them to recover.

Reynolds learned to trust humans after we picked him up and the court awarded him to us. Initially he was beyond fearful, but through continued positive reinforcement, he became what is known in the horse world as a “pocket pony.” He would walk up to anybody if he thought a carrot might be involved, or if a good neck scratch might be in the offering. It’s just that kind of trust that ended up with him having a rope wrapped around his neck and pulled through the cut fence line.

We searched for two more days, driving down each street, following up on every lead, handing out flyers to everyone we saw, until one night the phone rang, “I found your horse.”

Within minutes, we had a freaked, sweaty and very nervous Reynolds loaded in the trailer. A bunch of teenagers allegedly “found” him running down the street, a story I still don’t believe. More than likely, the media attention meant that it simply got too hot in the neighborhood for the horse to be kept in hiding.

Reynolds is home now, and safe. It took a couple of days to calm him back down, and more than a couple of carrots for him to know that life is good again.

We haven’t arrested the horse thief yet; that’s coming as we find out more details. Perhaps it gives us a chance to stop a young person from evolving into an adult criminal if they are willing to listen. Stealing doesn’t start with a horse, it started long ago with no one teaching respect for others. If we can offer that, then two lives will have been saved.