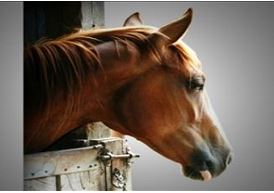 From: WYMT
By: Hillary Thornton

MAGOFFIN COUNTY, Ky. (WYMT) – A horse with a very unique story made its way back home to a farm in Magoffin County after being away for 12 years.

Thirteen years ago a horse named, Summer, was born here at A & J Farm. Avavan Deaton says, “She could not stand up. Once she got moving around we noticed both of her front two feet at the joint were turned straight up.”

Doctors at the University of Kentucky Equine Center looked at Summer’s condition and said there was nothing that could be done..offering to pay to have the horse put down.

“I said no way! She’s healthy in every other way other than that, I’m not doing that. There has got to be a way to fix this,” says Deaton.

Determined to save the horse, Deaton got in contact with a veterinarian in West Liberty.

“We came up with PVC pipe. We took it and split it and heated it so it would turn like her little legs were. Put the pipe on and wrapped it in a cotton cloth cast and just started from there,” explains Deaton.

After putting hours of work in each day, 5 months later Summer could stand. With straight and strong legs at 14 months old, against Deaton’s will Summer was sold.

“Threw me a little fit, I cried, did everything and she was gone! No trace…nobody knew anything,” says Deaton.

Fast forward 12 years later, Deaton received a lead on where Summer may be and determined to find her…Deaton found the horse in Johnson County.

“Part of me says that day when I walked into that field and called to her she recognized my voice, I think,” says Deaton.

Amazed at how strong and beautiful Summer grew to be, Deaton and her husband were able to buy the miracle horse back.

A horse that beat the odds and is now living a healthy life on the farm that believed she would walk.

“If something is meant to be and sometimes if you just give mother nature, the good Lord above, and a little elbow grease to it, it will come about,” explains Deaton.