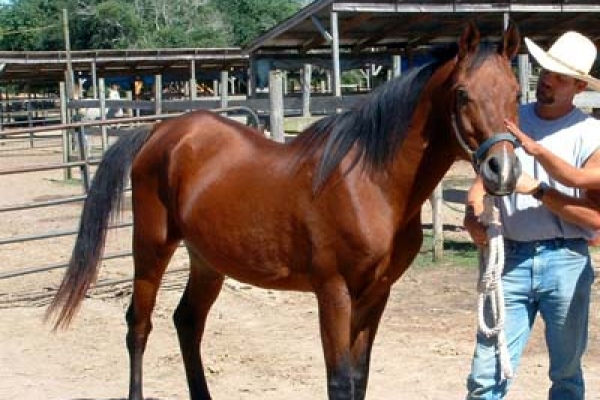 Marco
Into The Dark

View photos of Marco as he recovers and grows healthier. 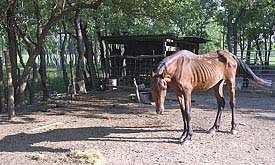 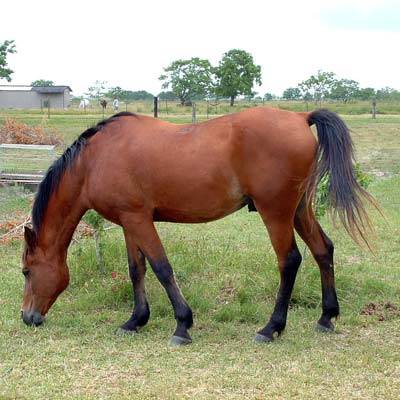 [spacer size=”10″]
[heading bg=”#940909″ color=”#ffffff”]Horse Stories[/heading][display_news_s3 include_excerpt=”false” excerpt_l=”15″ include_date=”false” posts_per_page=”20″ offset=”0″ orderby=”date” order=”ASC” post_type=”post” category=”stories”][/column][column size=”3-5″ style=”0″ last=”1″]He slipped through the cracks. Of all the things that could happen to a perfect horse, a highly trained, registered Arabian stud, his fate became sealed when the lady bought him in trade for some other horses and took Marco away from his green pastures and his equally beautiful soul mate, a pure white Arabian named Misty. Just a few miles away, the trailer doors opened and he faced his new home, a dirt paddock in the middle of a collection of broken house trailers, used refrigerators, rusted panels and piles of accumulated trash.

If horses could shed tears of sorrow, Marco had every reason to cry in despair. The lady never fed him, never lifted a finger to attend to his needs. He wandered the paddock, searching for a blade of grass, finally eating the bark off a lone, scraggly tree and, when the hunger became more than he could bear, chewing on the wood fence and swallowing the small pieces his loose teeth could tear off.

His worst nightmare came when the lady killed another horse as he watched. A new, pregnant mare had come a few days before. One afternoon the mare had colic, but rather than call a vet the lady decided that she’d deliver the baby by cutting the mare’s abdomen open. Of course, the mare and the baby both died in screaming agony. The lady the half buried the mare with her head and feet above the ground and burned the body, leaving the remains for Marco to see as he wandered his paddock searching for food.

Late one afternoon, a schoolgirl caught a glimpse of Marco’s thin body while she walked home from school. She called Habitat for Horses and a few days later, we walked onto the property with three different police departments and seized 58 various animals, from horses to llamas, and ordered the lady to court on animal cruelty charges. The court awarded all the animals to us and Lone Star Equine Rescue, who aided us in the seizure.

Marco moved to the ranch and immediately attacked the hay we placed before him. Besides being covered in lice and filled with intestinal worms, his teeth were loose and his hooves were in terrible shape. After two months of rehabilitation, he was gelded. The transformation took place slowly, but week-by-week Marco grew stronger until most of his lost weight returned. During that time, he was visited by a couple that knew him before the lady did her damage, telling us stories about his training and background. Their children stood by the fence and finally, when Marco was strong enough, joined him in the paddock to groom, hug and love him.
When it was time, with Marco healed and strong, they loaded him in their trailer and took him to their home. As soon as he stepped from the trailer, his life once again became complete. Misty, his long ago love, stood at the gate, crying out for him to hurry. Within seconds, the horror of his experience disappeared and he ran to her side. They are together again, forever this time, in a pasture filled with green grass.[/column]