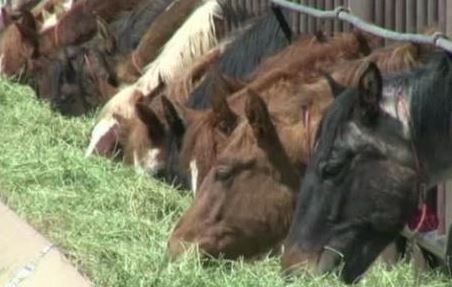 A response no doubt to the other article we posted about Albuquerque’s zoo use of horse meat. A disgusting practice that needs to be done away with – horses are not meat and the medications horses receive in their lifetime make them unfit as food for either man or beast. ~ HfH 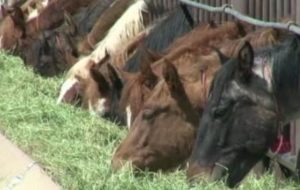 ALBUQUERQUE — After first reporting yesterday that the Albuquerque BioPark will receive 38,000 pounds of horse meat to feed its animals, KOB looked into other zoos across the country to see what they were feeding their animals.

Only six of the eleven zoos KOB contacted across the country responded, and results were mixed.

The San Diego Zoo said they do use horse meet, but said they only recently started using a little bit last year. The zoo said some of their animals stopped responding to all-beef diets, which is why they switched to horse meat for some animals.

The Houston Zoo said they also used horse meet, and noted it was the “most nutritious” meat available to them.

The only major zoo KOB contacted that said they did not use horse meat was Omaha’s Henry Doorly Zoo. The zoo said they stopped using horse meat about ten years ago for budgetary reasons.

Here in Albuquerque, BioPark Director Rick Janser said the zoo tried an all-beef diet, but said several types of animals stopped eating altogether. He says the horse meat they use is safe and comes from the same Canadian supplier that multiple zoos across the country use.

“You know, if something works, why change it?” Janser said. “Why change it just for the sake of changing it?”

Horse meat critics question the safety of the meat, saying horses, in general, are injected with more than 100 chemicals that undoubtedly have long-term health consequences.

After all, horse meat no longer exists in household pet food in the U.S.

Albuquerque plans to go forward with its ongoing purchase of horse meat in the next few weeks.