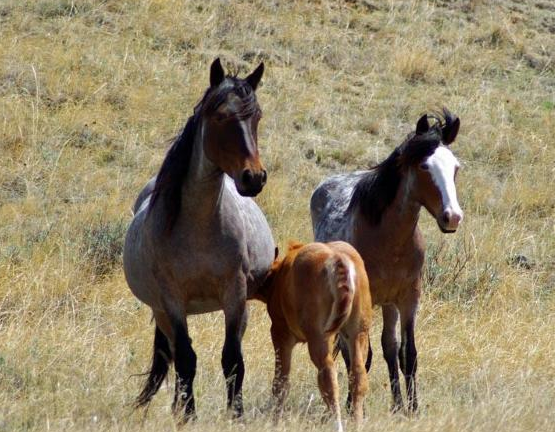 Are the wild horses and burros living on National Park Service lands not protected by the 1971 Wild and Free-Roaming Horses and Burros Act? Just a thought, since the article below makes it seem like in some of our National Parks, officials could just go out and “eradicate them”. There is nothing in the article that really addresses whether the horses are humanely dealt with or not. If any of our readers works for the National Parks system or knows the answer, be sure to comment! ~ HfH

From: The Horse
By: Michelle Anderson 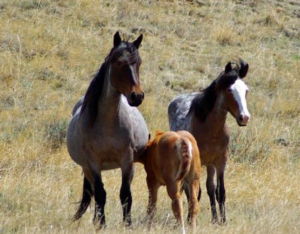 Picture taken at T. Roosevelt Nat’l Park. Young horses will stay with their natal herd until they are two or three years old. This group of horses consists of a yearling foal and newborn foal with their mother.

This is a synopsis of a presentation to veterinarians during The American Mustang session at the 2014 American Association of Equine Practitioners Convention, held Dec. 6-10 in Salt Lake City, Utah.


For most people, the mention of wild horses in the United States conjures images of Bureau of Land Management (BLM)-administered American Mustangs roaming the West. However, pockets feral horses also live throughout the country on National Park Service (NPS) lands and are managed by this federal agency.

Horses and ponies currently reside in about 20 NPS units; 10 units contain feral donkeys and burros. These herds include, among others, the famous Assateague Island ponies residing off the coast of Maryland and Virginia, the Shackleford ponies of Cape Lookout National Seashore in North Carolina, and the Theodore Roosevelt National Park feral horses in North Dakota.

The NPS formed under the Organic Act of 1916 with the mission “to conserve the scenery and the natural historic objects and the wildlife therein and to provide for the enjoyment of the same in such manner as to leave them unimpaired for the enjoyment of future generations.” Further amendments solidified the NPS’s value of preserving the “naturalness” of parklands, Powers explained.

And, within the definition of “naturalness,” lies the NPS’s challenge regarding equid management. Because NPS horses are feral domestic animals, not native wildlife, argument as to whether they’re a natural part of the ecosystem exists. While horses and burros currently reside on public lands, they aren’t native.

Horses played a vital role in transportation, military action, and agriculture as the United States formed and settlers headed west. However, as reliance on horses and other equids dwindled with industrialization, equids were released or abandoned on western rangelands or remained as remnant herds from early colonial exploration, homesteading, and ranching in areas around the country, Powers said.

Equids residing on NPS lands fall into four categories regarding their management: