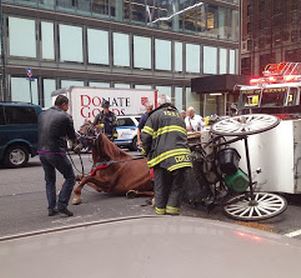 The controversy over the New York City horse carriage industry has been building for some time now.  This past election it was one of the main topics of discussion for the NYC Mayoral race.  Here is an article on why the carriage rides need to be stopped. ~ HfH

New York City – November 2013. It’s been bad news for those who operate horse-drawn carriages in New York City and it is about time. For years it was bad news for those who cared about animal welfare – with one cold hearted and insensitive Mayor after the other in office. But this election season it was different with the top two candidates running for the office of Mayor both taking an official stand in support of shutting down the inhumane and unsafe horse-drawn carriage trade.

The carriage drivers and their friends are desperate and digging in their heels. Even though the handwriting is on the wall and has been for some time and two separate alternate businesses have been offered to them and turned down, they are making up lies about their carriage business to try to influence public opinion. They put out statements designed to deceive and to make things appear much better than they really are … as long as no one asks questions. The media in far corners of the US – and some in New York City – have picked up the Associated Press story and shamefully did no fact checking on their own.

This is a business that has been unpopular in NYC for many, many years – a business that has been favored by the last two administrations that turned their backs on the violations and abuse. With Mayor-Elect Bill deBlasio taking office in January 2014 – it will be different. Mr. DeBlasio has promised to ban the horse-drawn carriage trade in New York City.

To sort through the duplicity put out by the carriage trade, the following is a list of their
LIES followed by the TRUTH.

LIE: There have been only three carriage horses who died as a result of a collision with traffic in the past 30 years.
TRUTH: In the last 7 years, there have been at least 4 public deaths of carriage horses in NYC and many more within the confines of the stables. Spotty – 2006; Juliet – 2006, Smoothie – 2007, Charlie 2011. But there have been many more horses who were injured because of accidents. The public does not differentiate between a horse like Spotty who was involved in a horrific traffic accident in 2006 and Charlie who dropped dead on the street several years later. There is something about the image of a dead horse – helpless and no longer powerful – that resonates with our collective unconscious guilt – where we feel a sense of responsibility for allowing this abuse to continue without speaking up.

LIE: The industry is 155 years old.
TRUTH: This statement is designed to have people think this is a long and venerable business. 155 years would take us back to 1858 when Central Park was being built. Everyone used horses then. The industry as we know it today started in the late 1940s when Mayor William O’Dwyer issued 68 medallions to individuals to operate a horse-drawn carriages.

LIE: All the horse stalls are box stalls
TRUTH: A box stall is simply a configuration and says nothing about size. According to law, the stalls must be at least 60 square feet.

But this is less than half what experts recommend, which is 144 square feet (12’ x 12’) for a standardbred horse who weighs about 1000 to 1200 pounds; for larger draft breeds who can weigh more than 2,000 pounds, experts recommend at least a 197 square foot stall (14’ x14’). The space does not exist in the NYC stables to do this properly so the horses are stuck with substandard sized stalls.

LIE: The horses get a vacation for at least 5 weeks out of the year.
TRUTH: A “vacation” is a human concept. Horses need daily turnout to pasture, which does not exist in NYC. So for 47 weeks out of the year, the horses are confined to their small stalls when they are not working on the streets of NYC. The Department of Health (DoH) does not require a list of the “farms” where the horses are sent and the ASPCA is not required to inspect them. According to this article in theNY Post, former ASPCA equine veterinarian Pam Corey said that many of the horses look worse when they return from this vacation. It was never investigated.

Dr. Corey, the director of equine veterinary services of the ASPCA’s humane law-enforcement department, said, “We have observed some horses returning to New York City after furloughs on a farm in worse condition than when they left.”

We have also heard this from others – that the horses are not fed properly when on “vacation” and are returned to NYC thin and unfit, but expected to return to work nine hours a day. This is truly a travesty and the NYC media must accept much of the blame for perpetuating this nonsense and not fact checking.