Let’s talk about talking with horses

Let’s talk about talking with horses 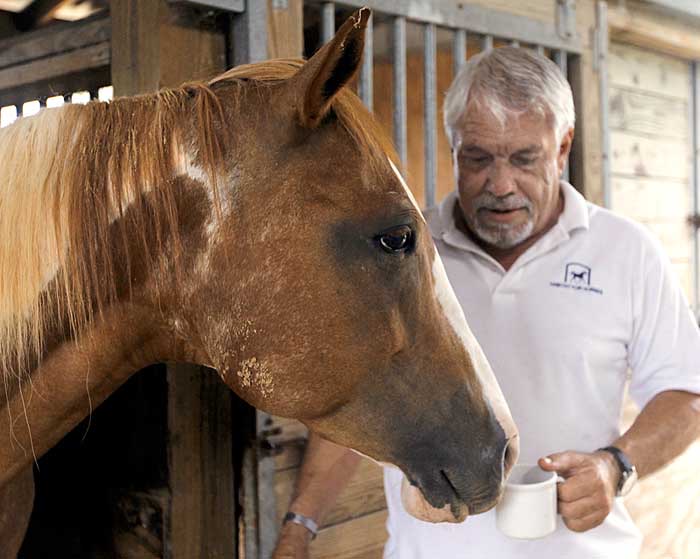 There is no basis for any of the following other than the wisdom of a very wise old cowboy. Everyone called him Boss, because he was. He managed the horse corrals where I got my first real job.

Boss was the perfect image of the old West, a tobacco-chewing, spittin’ old cuss who knew more about horses than anyone else I’ve ever known. At thirteen, I already knew everything about horses, life, and love. But Boss thought otherwise, and that frustrated the heck out of me.

Almost every summer afternoon, after all the ranch chores were done, he’d invite me to sit on the porch and talk about horses. At first, I resisted. I’d squirm, look bored, and act like I had a million things to do. Two things kept me there; first, he was my boss, and second, I loved my job.

He was patient, listened to my teenage ramblings, and let me make a complete fool of myself. He never said anything negative about my adolescent wisdom, but when I finished, he started talking. That’s when I discovered a world I never knew existed.

I’d give anything to sit down with Boss again, now that I’m old enough to know that I don’t know anything. A summer afternoon, sitting on a country porch, watching lazy horses grazing, and listening to Boss tell stories is a memory that I cherish. Sometimes, when you finally realize that you really want to learn, all the teachers have passed on.

One hot and humid afternoon, I looked over and saw my horse, Mac, limping, something no one wants to see. My first instinct was to pick up his foot and check for a stone. Mac wanted to be left alone, which led to a disagreement. After a full twenty minutes of a heated verbal and nonverbal discussion with Mac, I won the battle and removed a little pebble.

Boss sat on the porch watching. When I was done, he joined me in the corral.

“Horses don’t speak English,” he said. “You can try all day long, but that horse will never understand how to stack hay bales or why stones get caught in a hoof. What he did understand is that you’re fussing and uptight, that you’re acting busy and probably need to be left alone. I don’t know if you noticed, but Mac didn’t want anything to do with you.”

“But he had something wrong with his hoof, and I had to find out,” I answered.

“Sure you did, but let’s do it another way.”

He went on to explain, “If you draw an image in your mind of you helping, of you reducing the pain by picking up the hoof, and send it to the horse, he’ll see it in his mind. That way, he’ll understand what you’re doing.

“At the same time, if you’re very, very quiet, and if you clear your mind completely, you can also see the horse’s thoughts as images. That’s the way to communicate with your horse,” he said. “In fact, that’s the only way.”

I pretended like I knew what he was talking about. Boss could see through that well enough to know that I didn’t have a clue.

“Let’s use what just happened as an example,” he continued. “It’s hot, you’re tired and just want to go home, but, limping or not, you need to clean your horse’s hoof. That’s something you need to do every day. You grabbed that hoof and jerk it up. Mac pulled that hoof away and stomped it down. You grabbed it again, he jerked it again. I was watching you getting frustrated. By the time Mac gave in, you were fuming, red-faced, and ready to fight. Am I right?”

“Nobody won that battle. It’s at that point we should realize that we are just not communicating. Far too many people respond by thinking they need to teach the horse a lesson. Slapping him hard on his rump does nothing more than teaching fear and, if you want a relationship with your horse, fear is the worst feeling your horse should have. Fear totally replaces respect.”

Boss had my complete attention. I knew something important was happening, but I didn’t know that his words would change my life.

“Any good horse person knows it’s time to calm down and build a relationship based on trust and respect.” He smiled at me, “Of course, we never let our anger get in the way of an opportunity to build a better relationship, right?”

That’s when Boss showed me the magic. He walked over to Mac, scratched along his neck, bent over, lifted his hoof, held it for a moment, and gently put it back down.

“What did I just do?” he asked. “What was different between your actions and mine?’

“I guess you were a lot calmer,” I answered.

“There is that, but there’s a lot more,” Boss said. “I sent Mac an image, a peaceful, calm picture. I didn’t talk using words he can’t understand. I used pictures, feelings. He understood what I wanted because he saw it. No fear, just a respectful understanding.”

“But what if Mac is busy inside his own head and can’t see the picture you’re sending?”

“If he doesn’t see it,” Boss said, “find out what’s wrong. Clear your mind and let the horse’s image come to you. As it does, grasp the feeling that comes with it. Is it pain? Fear? Excitement? There is a reason for his resistance, and that reason is available to you if you let yourself see and feel as the horse sees and feels.

“In other words,” he added, “become like the horse.”

We walked over to the porch. Boss sat in his favorite place, a handmade rocking chair that was probably older than him. I sat on the steps, paying close attention to his words.

“There is a fine line,” Boss continued, “between thinking a horse understands our world and understanding a horse’s world. You gotta’ keep yourself out of it if you want to hear what a horse is saying. Our human thinking can destroy what the horse is trying to tell us.

“I can’t say it enough, son. Mac doesn’t know your world. If you really want to build a good relationship with Mac or with any horse, get into their world and out of yours.

“There’s no proof, but good horse people know that horses understand love and hate, fear, respect, pain, and loneliness, just the same as humans. To hear a horse talk about those things, you must put aside your own emotions. It’s done through images, pictures drawn upon a blank screen inside your mind. Listen to the horse within you, son. Become one with your horse.”

That afternoon changed my life. Because of Boss, I quit forcing my will on horses and started trying to understand them. That summer, I also went from a “know-it-all” teenager to looking at the world in absolute amazement.

It all makes sense, doesn’t it? When the feeling of calm surrounds you, it surrounds your horse as well. You work as one. You know, and your horse knows, because you each see the pictures of the other.

Way back then, back in the days of my youth, I stopped seeing horses as “them.” I started understanding, communicating, and learning from the horses. Instead of using fear, I learned to show respect. Instead of demanding, I asked with kindness.

Far too many horse owners and trainers raise a whip as a sign of dominance. Far too few use their brain as a path to understanding, respect, and love.

If we could take that lesson and apply it to our own lives, how much better our world would be.