Landowners Have Mixed Feelings About These Free-Roaming Ponies

Landowners Have Mixed Feelings About These Free-Roaming Ponies 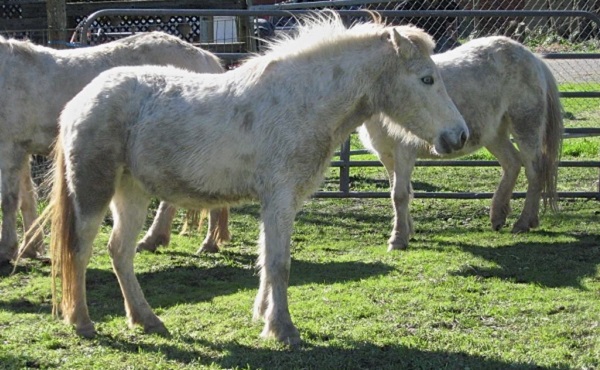 Just west of Ukiah, a small town in northern California, live several wild ponies. They were originally brought to the area by psychiatrist Waldo Cook as a surprise for his family 50 years ago. Who wouldn’t want a trailer full of 10 Shetland ponies, he probably asked himself.

“All I know was the truck arrived and the ponies were there,” Lois Cook, now 84, told The Press Democrat of her late husband’s gift. “It was quite a surprise.”

All of the ponies were mares and some of them were pregnant. That number grew when Waldo Cook purchased a Welsh stallion. According to The Press Democrat, the Cook family kept the ponies for less than 10 years. They sold most of them at auction. Some managed to either escape or were deliberately let free because since then the ponies have been roaming the area on their own. The exact number is unknown, but reportedly ranges from dozens to hundreds.

The Robinson Creek ponies, as they’re known, may be an amusing story Cook can share about her husband, but as their population has grown, not all area residents feel the same.

Just last month, six of the ponies wandered out of their natural habitat and crossed the highway twice. Out of concern for their safety, horse rescue groups captured the ponies and brought them to Freedom Reins, a horse sanctuary in the area, Ukiah Daily Journal reports.

The stallions were castrated and the ponies were quarantined for a bit. They were then released onto the sanctuary’s 7,000-acre ranch.

Those in the area are considering rounding up the rest of the ponies and having the remaining stallions castrated since they’re not an endangered or protected species but pets who were allowed to run wild. According to The Press Democrat, “Some residents would like to see their numbers reduced and controlled. They say the land can’t support so many; they’re eating food the deer need to survive; and they’re causing property damage, including muddying springs and breaking irrigation lines.”